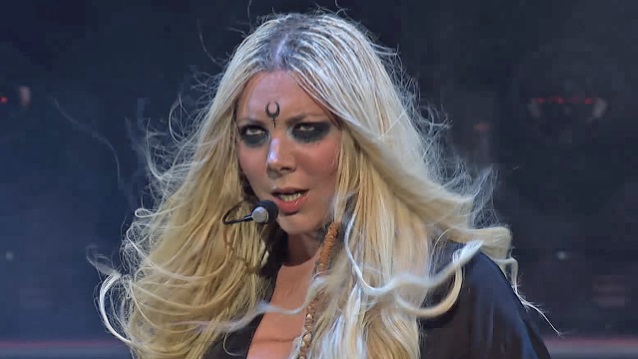 IN THIS MOMENT Releases Performance Video For 'River Of Fire'

IN THIS MOMENT's live video for the song "River Of Fire" can be seen below. The track is taken from the band's latest album, "Ritual", which was released last July by Atlantic Records in partnership with Roadrunner Records. The disc features a guest appearance from JUDAS PRIEST frontman Rob Halford on the song "Black Wedding".

Guitarist Chris Howorth told Lancaster Online about the writing and recording process for "Ritual": "The word 'grueling' comes to mind with that, only because the pressure that we put on ourselves, more than anything else, of wanting it to be great.

"Maria's [Brink, vocals] a real artist. What she sings about has to be something she's connected to or feels, or she feels fake and can't do it. She's always second-guessing and questioning whether something that we did is good enough."

Regarding IN THIS MOMENT's live shows, Howorth told BandsInTown: "Maria is usually at the center of this hurricane directing and planning the whole thing. It starts right when the songs are being written and continues right up to the first show. We are always trying to out do ourselves with our live show and that takes constant planning and working on things.

"We always try to utilize the stage setup to make every song special in its own way. Maria uses the stage design and props to enhance each song and bring the message or story to life for the crowd."