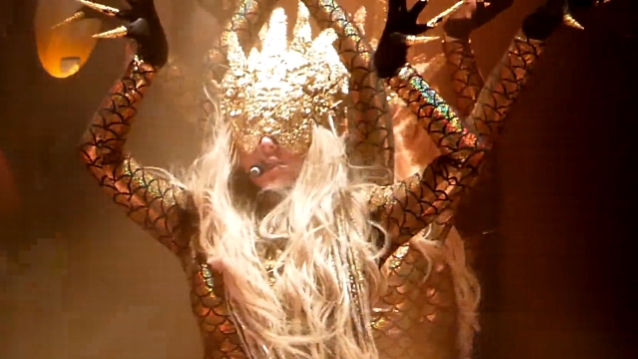 IN THIS MOMENT To Release 'Mother' Album In The Summer

IN THIS MOMENT has set "Mother" as the title of its new album, tentatively due in August. The disc was once again recorded at The Hideout Recording Studio in Las Vegas, Nevada with producer Kevin Churko.

Speaking to Cutter of Green Bay, Wisconsin radio station Razor 94.7/104.7, IN THIS MOMENT guitarist Chris Howorth stated about the musical direction of the follow-up to 2017's "Ritual" (hear audio below): "This is our heaviest record since [2012's] 'Blood'… ['Ritual'] was getting heavier than [2014's] 'Black Widow'. 'Black Widow' was heavy in its own way, but this one's just… Now that it's all done and I'm hearing it as one thing, I'm, like, 'Damn! This is really heavy.' So I think a lot of our fans are gonna really like that about it."

Regarding the inspiration for the new IN THIS MOMENT album title, Howorth said: "It's 'Mother' in the sense of Maria's [Brink, IN THIS MOMENT singer] a mother, mother Maria, but also Mother Earth. Mother is the key to life."

While IN THIS MOMENT is "still working on the artwork" for "Mother", Chris said that it "will reflect the songs and the stage, and everything will all fit together in a nice little package."

Howorth also talked about IN THIS MOMENT's new stage show, which the band premiered earlier this month at the Welcome To Rockville festival in Jacksonville, Florida.

"It's like a village or something come to life," he said. "We kind of wanted to make it very theatrical. We've always been theatrical; we wanted to take it up a notch. And it's almost like a little Salem village come to life on stage. We have another dancer with us now. There's three girls in addition to Maria, so there's four of them up there now, which is really cool — it adds a whole another dimension to the show. The lighting is really, really cool. The little village lights up and does cool stuff.

"We're still working on it," he continued. "We just started this. We had all these ideas while we were working on the record, and we kind of started sketching it out. And everything was just 'rush, rush, rush' to get it done, 'cause we literally finished the record and we had two weeks at home before we went to Nashville to start building this production. And we were literally there for two and a half weeks working on the lights, making sure the staging… sending it back to get worked on again. And then the first two shows being festivals, you can't really do your whole thing, so we're having to figure out how we're gonna this work there and then do it at the headlining show. But, thankfully, it's kind of locked in a little groove. It is a whole new thing. It's kind of exciting, too, for us to be playing for all of our fans that have seen us so many times and supported us with a brand new thing."

"Ritual" included an eerie cover of Phil Collins' "In The Air Tonight", and Brink previously told KLAQ's Lisa Sanchez that there was a good chance the follow-up effort would see IN THIS MOMENT tackling yet another classic song.

IN THIS MOMENT has a number of shows scheduled through the rest of the year, including summer festival appearances in the U.S., dates with DISTURBED in September/October and a European tour in November.

Listen to "Rockcast 128 - Backstage with Chris Howorth of In This Moment" on Spreaker.
Find more on In this moment