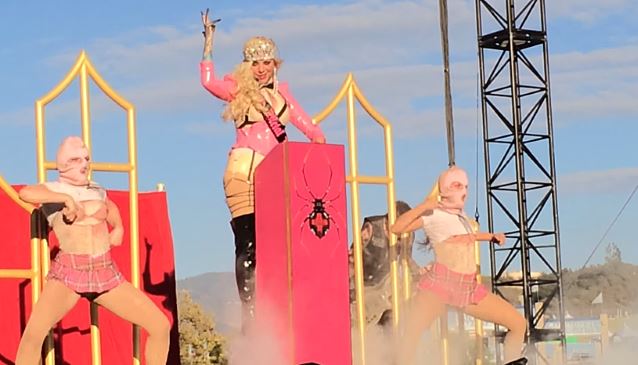 IN THIS MOMENT frontwoman Maria Brink says that the band's new song "Sex Metal Barbie" was written "around all the awful things people had to say about" her. The track is taken from the band's fifth studio album, titled "Black Widow", which will be released on November 17. The CD was once again helmed by Kevin Churko (OZZY OSBOURNE, FIVE FINGER DEATH PUNCH, HELLYEAH, PAPA ROACH) at his The Hideout Recording Studio in Las Vegas, Nevada.

Speaking to Revolver magazine, Brink said: "I wanted to take all the negativity that has come my way and turn it into something powerful for me to utilize.

"I've stopped reading social media in the last few years because I've realized the mean things people say can be toxic. So I've learned to become numb to it."

She continued: "I think it's better to just do your art and follow your heart.

"I don't embrace the yucky stuff. But for this song, I decided to embrace it. I said, 'I'm gonna go read all the really mean things that people say about me. All the rumors.' So the whole band got online and started Googling. And then we wrote the song around all the awful things people had to say about me."

"Black Widow" is available for pre-order on the iTunes Store and other digital retailers. The album is being offered to fans in an array of distinctive configurations, including a very special vinyl piece exclusively available at Atlantic's webstore. All pre-orders will receive four instant grat downloads prior to the album release.