According to Tanjug, part of the proceeds from IRON MAIDEN's June 17 concert in Belgrade, Serbia will go towards rebuilding the country after it was ravaged by its worst floods in over a century.

Earlier this month, the worst floods in 120 years swept through Serbia, Bosnia and Croatia, killing at least 50 people and leaving tens of thousands homeless or trying to repair the damage to their homes.

IRON MAIDEN bassist Steve Harris said in a statement that he believes Serbia "will come out stronger after the disaster the recent floods."

The band's current "Maiden England" tour is based on the 1988 set list from the "Seventh Son Of A Seventh Son" trek.

Said IRON MAIDEN singer Bruce Dickinson: "We have tweaked the 'Maiden England' set list a bit to make it more representative of our whole '80s era and to give the fans something a bit different, especially as this will be the last of our three tours with an historical perspective."

IRON MAIDEN in August 2013 landed at position No. 1 on Billboard.com's "Hot Tours" list of top-grossing tours with $8.5 million in ticket sales from six performances on their summer tour of Europe. The shows were attended by a total of 121,280 fans, including a two-night, sold-out stand on August 3-4, 2013 at the O2 Arena in Lonon, England, where the band played to 27,000 fans. With totals added from last summer's Europe dates, overall ticket sales from the tour topped $42 million from 45 reported concerts. 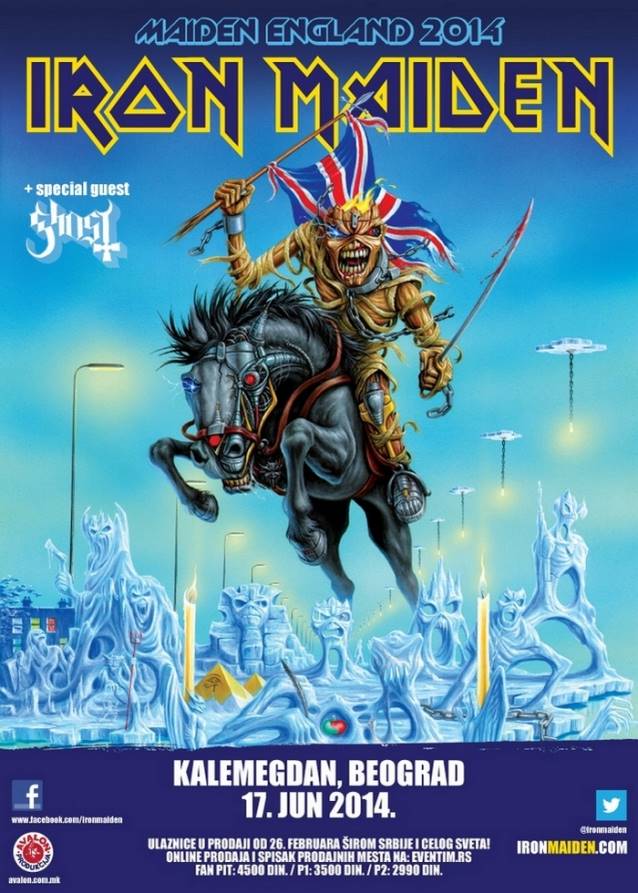