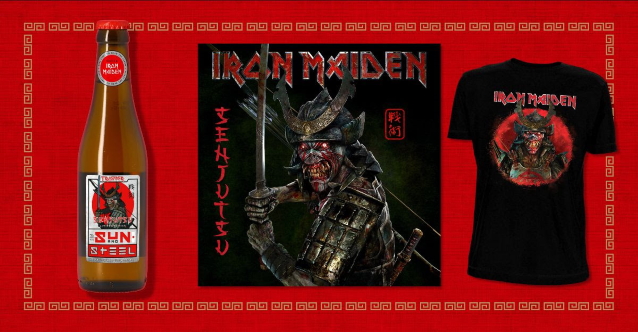 In a U.K. first, legendary British metallers IRON MAIDEN are celebrating the launch of the 17th studio album, "Senjutsu", with two other unique products for their fans. 226 of the Asda stores will carry a display unit with an exclusive album edition of Trooper's Sun & Steel Japanese lager and their very own album t-shirt featuring band icon, Eddie.

"IRON MAIDEN are an incredible British institution and the best in their field so it's really exciting for us to be able to reward their legions of fans with some fantastic products for the launch of their hugely anticipated new album, 'Senjutsu', on September 3rd," says Andrew Thompson, Asda's senior manager on entertainment.

Adds Warner Music's SVP commercial Derek Allen: "There are few bands in the world that can provide such a breadth of products that their fan base love and we're delighted that Asda respect music enough to partner with us across several sectors. Every MAIDEN studio album launch is an event and their fans get behind it like no other. This partnership offers something for everyone all in one place."

The limited-edition Sun & Steel re-branded Trooper Japanese lager is a must for craft beer drinkers, MAIDEN fans and collectors everywhere.

Trooper beer has now sold over 30 million pints around the world.

BMG will release "Senjutsu", IRON MAIDEN's first album in six years, on September 3. It was recorded in Paris with longstanding producer Kevin Shirley and co-produced by Steve Harris. It was preceded on July 15 by an already highly acclaimed animated video for the first single "The Writing On The Wall" made by BlinkInk based on a concept by singer Bruce Dickinson with two former Pixar executives. It followed a month-long teaser campaign and global "treasure hunt" for clues about the track title and concept.

For "Senjutsu" — loosely translated as "tactics and strategy" — the band once again enlisted the services of Mark Wilkinson to create the spectacular Samurai themed cover artwork, based on an idea by bassist Steve Harris. With a running time of a little under 82 minutes, "Senjutsu", like their previous record "The Book Of Souls", will be a double CD/triple vinyl album.