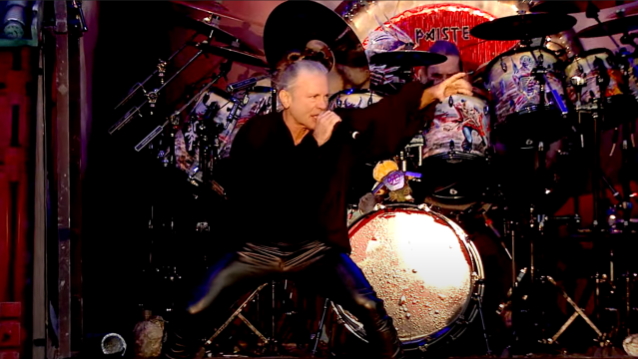 British heavy metal legends IRON MAIDEN have released the official live video for their song "Stratego" from. The track, which was written by guitarist Janick Gers and founding bassist Steve Harris, is taken from the band's 17th studio album, "Senjutsu", which came out in September 2021 via BMG.

Says IRON MAIDEN: "The U.S. & Canadian leg of the 'Legacy Of The Beast' world tour is now underway! Here is 'Stratego (Live)' — dedicated to you, our incredible fans across the world!"

"Senjutsu" was recorded in 2019 in Paris with longstanding producer Kevin Shirley and co-produced by Harris.

IRON MAIDEN singer Bruce Dickinson told France's La Claque FNAC about the LP: "It's always a big thrill when you get a new IRON MAIDEN album and it comes out. We thought it was a great album when we made it. But it was three years ago now. So we just have to pinch ourselves and go, 'Let's just check.' It's one of my favorite albums. And after 17 albums, it's pretty cool."

Regarding the writing and recording process for "Senjutsu", Bruce said: "I would like to say that everything was very organized, but actually, we're not. We turn up and we sort of go, 'Oh, has anybody got a couple of ideas?' And Steve said, 'I've got one idea. I've got this track 'Senjutsu'. What do we think about having a Samurai Eddie?' And we were, like, 'Oh, yeah. Cool. Why haven't we done that before?' Because we had an Egyptian Eddie and we had a sci-fi Eddie and we had a Mayan Eddie. The album is like the picture that's in the frame. But just because the frame is Japanese doesn't mean every song is organized to be about Japanese themes."

According to Billboard, "Senjutsu" logged the second-largest week of 2021 for a hard rock album in both equivalent album units earned and in traditional album sales. It trailed only FOO FIGHTERS' "Medicine At Midnight", which debuted on the February 20, 2021 chart with 70,000 units (of which 64,000 were in album sales).