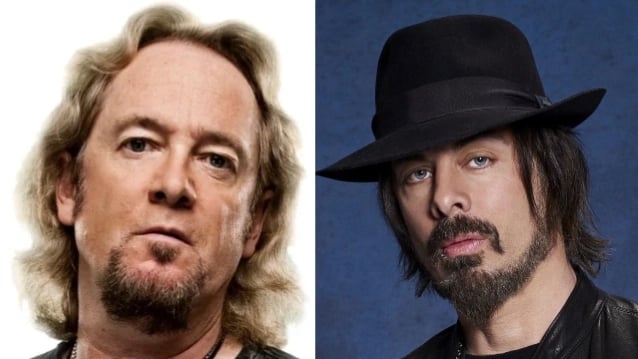 In a new interview with Eonmusic, IRON MAIDEN guitarist Adrian Smith confirmed that he has another side project in the works. "I'm very excited about it, but I can't say," he said. "I'm doing a lot of singing, but the person I'm working with, we're sort of splitting the vocals. But that'll be coming. I'm very excited about it, but I'm sworn to secrecy at the moment."

Asked if there is a possibility of any live dates from this project, Adrian said: "Hopefully, hopefully. It depends on the bloody virus, you know? At the moment, everything's screwed, so…"

Although Smith did not offer any details about his new project, he was almost certainly referring to a much-rumored collaboration with THE WINERY DOGS guitarist/vocalist Richie Kotzen, who had posted several photos of the two of them hanging out together in recent months.

Kotzen alluded to his project with Smith during a February 2020 interview with the "Another FN Podcast". At the time, he said: "I don't like talking about things until they're finished, but if you look at the photographs [on my Instagram] and who I'm with, and that sort of thing, you could assume that there may be a collaboration in the works."

Smith is currently promoting his memoir, "Monsters Of River & Rock", which will be released on September 3 via Virgin Books.

This past February, Kotzen released his 22nd solo album, "50 For 50", via his own custom label, Headroom-Inc. The three-disc collection is just what the title implies: a collection of 50 previously unreleased compositions produced, performed and written by Kotzen in honor of his birthday. It's the follow-up to his critically acclaimed "Salting Earth" album, which came out in April 2017 via Headroom-Inc.

@misteradriansmith and I discussing the magic of writing songs in C-sharp minor.