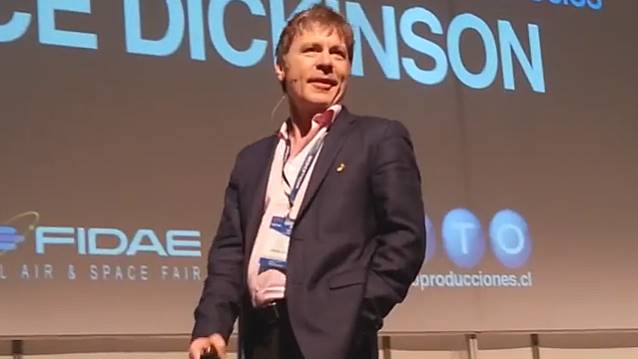 IRON MAIDEN singer Bruce Dickinson was one of the guest speakers at the International Air and Space Fair (FIDAE) on March 28 in Santiago, Chile. You can watch video footage of his appearance below.

Dickinson is a commercial pilot, business owner, entrepreneur and creative business thinker. He was a pilot and marketing director for Astraeus Airlines, a company which leased aircraft to other carriers. Bruce is also the man behind the company Cardiff Aviation, a project funded by the government which specializes in heavy maintenance of Airbus and Boeing commercial aircraft. He is also involved in an air ship venture to manufacture lighter than air hybrid transport aircraft. In addition, he is setting up a separate training company (Real World Aviation) to train future pilots.

Asked by Lufthansa Magazin what is more exhausting, a long-distance flight or an IRON MAIDEN concert, Dickinson said: "They are both tiring, but in different ways. The physical element at the IRON MAIDEN show is the most tiring part. Your brain is so wired you can’t sleep for about six hours. With flying, it is a very different kind of tired. You sit in a seat without any activity for nine or ten hours but your mind is exhausted because you've actually done a lot of high-concentration work at the beginning and end of the flight."

Regarding what the biggest contrast is between flying a plane and singing in a heavy metal band, Dickinson said: "Everything I do on stage is about exhibition, about putting on a show. Flying is completely the opposite, it is about the inside. You don't operate an airliner like the old aviators with a stick and rudder, you manage modern flights. What pilots really are, although it doesn't sound very sexy, are risk managers. Our job is to make the experience of flying undetectable to the passengers. When I was a pilot, I enjoyed that role because it was so different from my job in IRON MAIDEN."