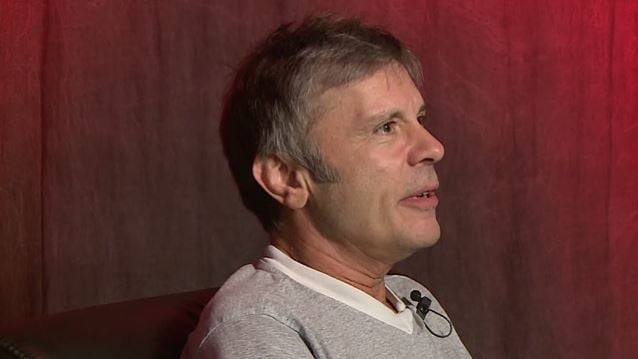 France's Hard Force magazine recently conducted an interview with IRON MAIDEN singer Bruce Dickinson. You can now listen to the chat in three parts below.

Speaking about whether he has any plans to work on a new solo album to follow up 2005's "Tyranny Of Souls", Dickinson said: "'If Eternity Should Fail', the opening track [of the new IRON MAIDEN album 'The Book Of Souls'], that was going to be the title track to my solo album. I had about six songs demoed, and Steve [Harris, IRON MAIDEN bassist] heard 'em last summer. And he went, 'That's a really cool song. Can we use that? That's gonna be the opening song on the album.' And I went, 'Yeah, okay.' And he was already writing, I think… He was already thinking of 'The Book Of Souls' as being the title, so he told me about the Mayan thing. And I'm, like, 'Yeah, that's cool. Okay. Yeah, I see where you're going.' But in my case, that song was written as part of a story. So the spoken word at the end is the beginning of a story that goes through the whole album. And one of the characters is Dr. Necropolis; he's the bad guy. And the good guy is Professor Lazarus; he raises people from the dead. So that introduces Necropolis in the spoken-word thing. And I asked Steve… I said, 'Look. Okay. I get having the song…' 'Cause it opens up with, 'Here is the soul of a man.' 'Yup. Get that. But what about the end?' I said, 'Will people understand what this is about? Because this is nothing to do with the Mayans or anything. This is to do with… I'd come up with a concept album that doesn't happen.' [Laughs] And he [went], 'No, no, no. It's just talking about souls and everything, and it sounds great.' I went, 'Okay.' [Laughs]"

Asked if he has already completed writing his next solo album, Dickinson said: "Not a whole one. I actually… One idea I had… And I don't know if I'm gonna do it yet… One idea I had was maybe in November or December or something, maybe to go out and start doing some writing and a little bit of demoing, just to try my voice out — under no stress, no jeopardy; just as an experiment to see what it sounded like. But we'll see. I mean, there's no way, even if I had a solo album finished and ready to go, it's not gonna come out next year, and it's probably not gonna come out the year after. So it's not to stress about it."

"The Book Of Souls" includes "Empire Of The Clouds", an 18-minute track penned by Dickinson, who was recently given the all-clear after being diagnosed with a tumor on his tongue late last year.

Dickinson made his recording debut with IRON MAIDEN on the "Number of the Beast" album in 1982. He quit the band in 1993 in order to pursue his solo career and was replaced by Blaze Bayley, who had previously been the lead singer of the metal band WOLFSBANE. After releasing two traditional metal albums with former MAIDEN guitarist Adrian Smith, Dickinson rejoined the band in 1999 along with Smith. Since then, Dickinson has only released one more solo album ("Tyranny of Souls") but has previously said that his solo career is not over.