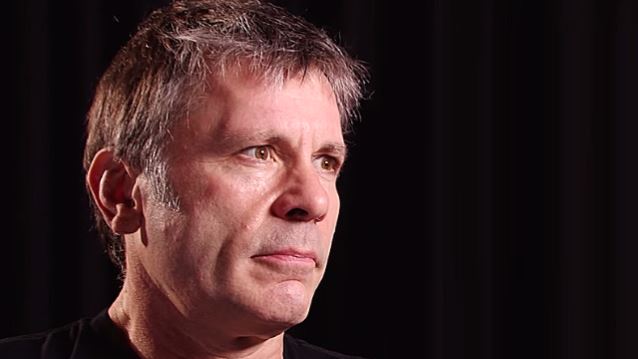 IRON MAIDEN singer Bruce Dickinson has revealed that HPV, the human papillomavirus, was the cause of his tongue cancer diagnosis in December 2014.

During an appearance on the August 31 edition of Eddie Trunk's SiriusXM satellite radio show, "Eddie Trunk Live", Dickinson was asked about his health, less than four months after he was given the "all-clear" by his specialists following his most recent MRI scan.

"One or two things are still healing up on the inside," he explained (as transcribed by BLABBERMOUTH.NET). "But I've had a bit of a singsong, and stuff seems to work. I mean, the larynx, all the nodes are completely unaffected by the whole thing. So all it is, really, is I'm missing a golf ball in the back of my tongue, which is the size of the lump that was there. So the golf ball has disappeared. And I don't even play golf. I haven't tried to find out where it's gone, but it's gone. And I think some of the muscles that move your pharynx and your throat around, I think they're missing it. They're, like, 'Hey, where has it gone?'"

He continued: "The only strange thing is that I genuinely think it's a bit of muscle memory about moving the size and shape of your pharynx and throat, 'cause it's a bit flexible, and you use it to make vowel sounds and things like that. Well, sometimes some of the transitions from a's to r's and e's to ooh's and things like that, at certain points in the register, [your voice can be] a little bit wobbly — you suddenly start sounding a bit yodelly — and I think it's purely a question of muscle tone, and you've just gotta work it and get it back in shape. 'Cause the notes are all there. I mean, I can sing… If I do 'Trooper' and stuff like that, it's, like, 'Oh, great,' 'cause it's in a high register and it's away from that particular area of your throat. But, as I say, things are still healing up. Swelling is still going down on the inside, 'cause I had a pretty good cookery lesson with radiation there for about three weeks or a month."

Dickinson, who doesn't smoke, also talked about a possible cause of his cancer. He said: "It's a virus. HPV — human papilloma virus. They all are. I'm almost willing to bet, anytime you hear about somebody who gets tonsil cancer, throat cancer, lung cancer, whatever it is, if they're not heavy smokers and they're not massive, heavy drinkers, it's almost inevitably… There's a five hundred percent increase in this type of cancer in men over forty — five hundred percent increase. It's massive. It's the same virus that causes cervical cancer. The diagnosis is the same. It's the same words they use. And the issue is that in guys, typically, it only presents as a lump in the side of your neck. It's probably already beavering away inside your tongue, and you don't even know. And the secondary one that pops up is the one that's right next door — in your lymph node. And that's the one that [where you go], 'Hey, what's this lump in my neck?'"

He continued: "I had two tumors — I had one golf ball-sized one in my tongue, and I had another one the size of a large strawberry or a small walnut in the lymph node in the right side of my neck, and that's the one that felt a little strange. I thought, 'Hmm, am I getting a cold? Am I getting some sort of bug, or what's going on?' But it didn't go down, and it was kind of hard; it wasn't squishy and moving around like normal soft tissue, a lymph node, does. So that was the giveaway, and typically, that is the only giveaway. 'Cause when I got diagnosed with it, I immediately went in and… You've got nothing else better to do for nine weeks or twelve weeks except Google it on the Internet, find out everything you can about it. Know your enemy, you know? And, so, looking at other guys' experiences and clinical reports, you find out that, wow, this thing is really prevalent and lots and lots of guys, they don't know a huge amount about why, about why it affects some guys and not other guys, why some guys get an HPV infection that doesn't go away, 'cause they normally just go away. But in some guys over forty, it doesn't. And everybody makes the jokes about [actor] Michael Douglas [who claimed that cunnilingus could have caused his throat cancer], 'cause he was having oral sex, and it's just, like, okay, we need to get over that one, guys, because this is kind of serious. There's hundreds of thousands of people at risk for this. And guys should know, if you get a lump here, and you're over forty, don't just assume antibiotics will get rid of it. Go and properly get it checked out. It's important."

While most strains of HPV clear up on their own, the sexually transmitted virus is responsible for an array of cancers.

The Huffington Post reported in 2013 that oral sex is an avenue through which a person can contract HPV and especially the strains HPV-18 and HPV-16, the latter of which is responsible for half of oral cancer cases, according to the National Cancer Institute. HPV-16, HPV-18 and some less-common strains can also cause cancers of the cervix, vagina, vulva, anus and penis.

According to the Centers for Disease Control, about 79 million Americans are currently infected with HPV and approximately 14 million people become newly infected each year, making it the most common sexually transmitted infection in the nation.

IRON MAIDEN's new album, "The Book Of Souls", will be released on September 4 through BMG in the U.S.A. (Parlophone Records in the rest of world).