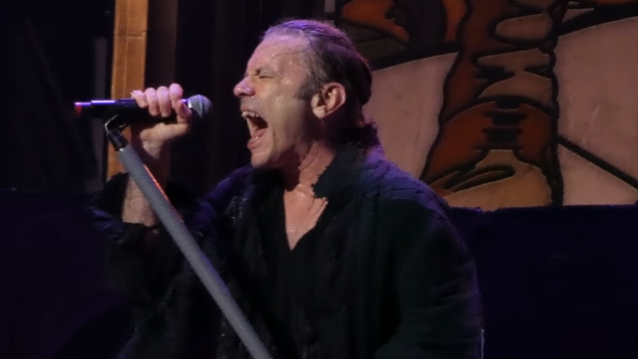 IRON MAIDEN singer Bruce Dickinson was interviewed by Becko of the Australian radio station Triple M when the band played in Chile on October 15. You can now watch the chat below.

Asked how he keeps his voice in shape after all these years, Dickinson said: "Clean living. No. Rubbish. A bit of common sense. I think a certain amount of it just has to do with your physiology and just how you're made up. I try and look after myself recently. Obviously, I had an issue with throat cancer five years ago now, and that was a bit of a worry."

According to Bruce, he was more concerned about surviving his cancer battle than possibily losing his singing ability through radiation. "The worrying thing was the 'alive' thing," he said. "The voice thing was actually — I actually genuinely wasn't bothered. I was just, like, 'You know what? I'll just settle for being alive and then we'll see what comes out.' But the guy who did the all the treatment for it was really cool. With all the radiation and stuff that I had, he said, 'Look, I'm gonna actually miss your larynx,' he said, 'so that bit of it should be absolutely fine.' And, actually, by the time they kind of cleaned out the pipes, 'cause I had a lump that was the size of a golf ball in the base of my tongue — well, that's gone. I mean, no surgery or anything. And I thought when that went, suddenly all this air is getting to places that it used to get to when I was, like, 25. So I'm thinking, 'Hey, wow! The high notes — oh my God! They're back properly.'"

Dickinson wrote about his cancer diagnosis and treatment extensively in his autobiography, "What Does This Button Do?", where he talked about how he endured radiation therapy that left the energetic frontman sapped of energy.

Bruce told iNews that he wanted to cover the episode in his book to raise awareness of the condition, which affects people who often have no or minimal history of tobacco or alcohol abuse. The individuals with HPV-related oropharyngeal cancer who undergo treatment have a disease-free survival rate of 85 to 90 percent over five years.