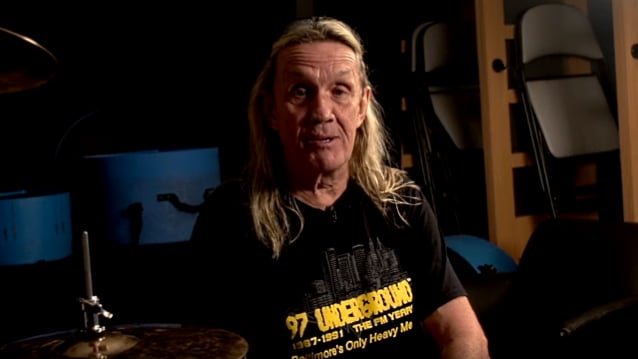 On October 15, Triple M's Becko interviewed IRON MAIDEN drummer Nicko McBrain at the final show of the band's 2019 leg of the "Legacy Of The Beast" tour in Chile. Speaking about the touring lifestyle, Nicko said (see video below): "It's funny, 'cause this is the last gig [before next spring]. I need the time off. We're not kids anymore, and yet we play like kids up on stage.

"The great thing about live music is if you love and have a passion for music, which we all do still, it doesn't matter how you feel, once you get up there… Yes, it can influence the way you perform, depending if you're sick or if you're just feeling really tired. Now, in my case, when I'm really fatigued, I tend to play faster," he explained. "Now, you think it'd be the other way around. As a drummer, what happens is you're trying harder, so things go up a little bit and you can kind of lose track of the way you're supposed to be. And likewise with the guitar players and singers. Bruce [Dickinson, vocals] sometimes gets tired and he won't actually go for a note. But you get onstage and this passion takes over and then you get the vibe of the audience as well."

IRON MAIDEN recently announced nearly three dozen shows for next spring and summer as part of its acclaimed "Legacy Of The Beast" tour. After a six-date run in Australia and New Zealand in May, they will play in Japan and the Philippines, before traveling to Dubai, United Arab Emirates and Tel Aviv, Israel. MAIDEN will then return to Europe for a number of festival appearances and headlining shows in Finland, Germany, United Kingdom, Belgium, Denmark, Norway, Sweden, Russia, Poland, Czech Republic, Holland, France, Austria, Italy, Portugal and Spain.