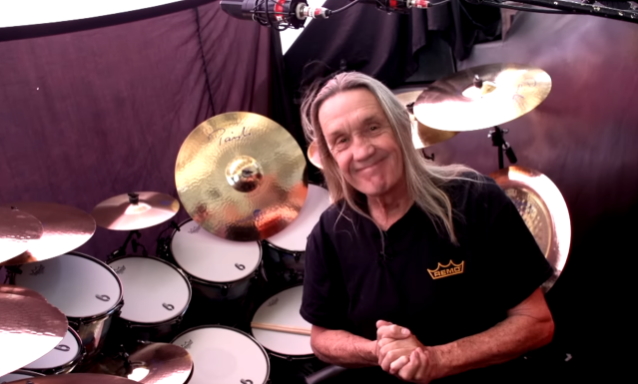 IRON MAIDEN's Nicko McBrain has shared a new seven-minute video breakdown of the drum kit he is using for the 2022 leg of the band's "Legacy Of The Beast" world tour. The trek, which launched on May 22 in Zagreb, Croatia, is scheduled to hit North America in September and October.

In November 2019, Nicko announced that he would be playing the Manchester, U.K.-based drum brand British Drum Co. and carry the title "International Ambassador" with it.

British Drum Co. has been around since 2015, launched by drum builder Keith Keough four years after he sold his own company, KD Drums, to Premier. Premier is the company McBrain endorsed for much of the '90s and 2000s. Nicko now plays the British Drum Co. Legend Series.

Nicko has his own IRON MAIDEN artwork on all the drums in his kit. Each drum features MAIDEN's mascot Eddie and has its own story relating to the stage set and to the history of the "Legacy" tour.