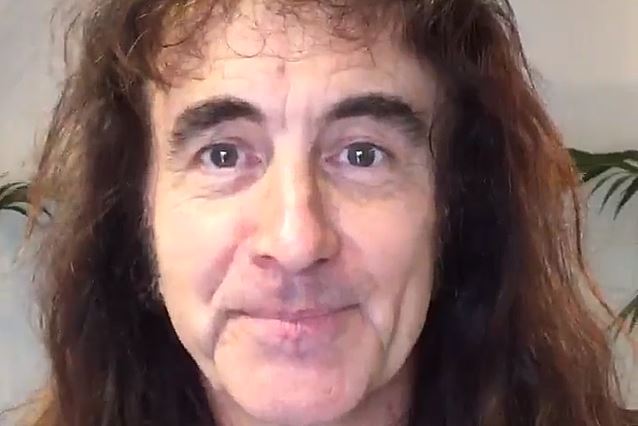 Ahead of IRON MAIDEN's barn-storming headline slot at last weekend's Download festival, bassist Steve Harris spoke to Planet Rock about how he has survived their 29 years of touring, that famous Ed Force One jet and how singer Bruce Dickinson's illness failed to derail the MAIDEN juggernaut. You can now listen to the chat below. A few excerpts follow (transcribed by BLABBERMOUTH.NET).

Steve: "It's a fantastic feeling just to be out there again, because, obviously, last year we didn't know whether we even had a band, let alone a tour, so… brilliant. Obviously, he's fine, he's singing fantastic — in fact, I think he's probably singing better than ever, really. He wanted to do more rehearsals, which is unheard of; he never likes doing loads of rehearsals. So we did extra rehearsals, and by the time we got to the end of rehearsals, he was really comfortable and really starting to feel good. And we were all, like, 'Wow, this is gonna be okay after all.' I mean, to be honest, even at the start of the rehearsals, he just sounded like he had a bit of a cold — which he did have a cold — so it didn't feel that much different for us, really. But I think, confidence-wise, towards the end of it, he was really feeling strong. I suppose you never really a hundred percent know, really, if the truth be known, how it was gonna be; none of us did. So the fact that after a month's rehearsals, he was in such good shape was absolutely fantastic. And, as I said, we're just pleased to be out on the tour — well, I am anyway; and I'm sure I can vouch for the rest of them when I say that. I mean, I'm just absolutely pleased just to be here."

On the restrictions IRON MAIDEN faced while playing in China for the first time:

Steve: "It wasn't too bad. I thought it was gonna be worse, actually. But they [the Chinese authorities] wouldn't let Bruce use the British flag — well, any flag. 'Cause we said, 'Can we use the Chinese flag?' And they wouldn't let that either. So that was a bit odd. But there were a few things. There was a really weird one where they said on the actual written setlist that we have on stage, we had to write a different song for 'Poweslave', but we could play the song. It was just… okay. [Laughs] So we wrote 'The Wicker Man' in, and Bruce actually sang 'The Wicker Man' on the first chorus; it was sort of a joke. But it was really odd things like that. I don't know why they do things like that; only they know the answer to that. But it was fine. We still put on a show. The crowd were great. I mean, they were much better than I thought, actually; the reaction was really, really good. I don't know what I was expecting, really, but I didn't think they would be as good as they were, to be honest. And all good, really. And I got to see The Great Wall, which I've always wanted to do. So, yeah, fantastic."

On saying in a 1987 interview that IRON MAIDEN was scaling back the touring lifestyle and now still being at it 29 years later:

Steve: "Yeah. If I said that then, wow! I mean, yeah, 29 years… it's amazing. But, yeah, we're still out there, still with the family and still touring and whatever. And that's probably why I'm still here — 'cause I gave up all the partying all them years ago. So I've lived so far to tell the tale. I think you just have to look after yourself, you know, when you're doing long tours; you just have to. I think bands learn that pretty soon, really. And if they don't, I think they tend to fall by the wayside. You have to be professional. You have to remember what you're there for. Yeah, you can party and you can have a bit of fun once in a while. We've done it a couple of times on this tour where we let our hair down a bit. But you've just gotta remember what you're there for. And if that's the case, then you just have to take it a bit easier. I mean, the first two tours that we toured around the world, we were hitting every single bar there was, as you do when you're young and you've got to find out all these things. But it got boring really quick. So, lucky for me, I used to tend to get pretty ill anyway drinking — it didn't seem to agree with me too well — so it was easier to give it up than some. So I could take it or leave it, really. But it's just one of them things. You just have to look after yourself. I mean, these days we have to do a lot more running and preparing for a tour, but, yeah, we're still here, we're still jumping about, and, yeah, long may it continue."

On Bruce piloting the IRON MAIDEN jet Ed Force One on tour:

Steve: "We designed the show to [include] inflatable stuff and this and that and the other, so we could pack it down and get more stuff [in there]. But it allowed us to have a little bit more in the cargo bay. So, yeah, all good, really. It means that we could, obviously, take more personnel. So the whole thing was just brilliant. For [Bruce], to be able to go and fly that about, he's so into his planes anyway that it's an absolutely fantastic opportunity. And, for me, it's just… again, as I said, it's great to be out there, but to step up a level to go on a massive plane like that… I mean, when I first saw it, I couldn't believe the size of the bloody thing! It's pretty scary, in a way, really. You think, 'How is it gonna get off the ground with all that gear in it?' But, yeah, [it's been] great."