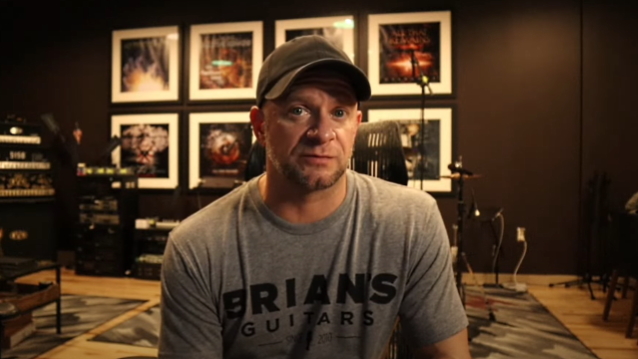 Is Rebelliousness Missing In Today's Rock Music? ALL THAT REMAINS Singer PHIL LABONTE Weighs In

During a recent appearance on the "Create Your Own Life" show, ALL THAT REMAINS vocalist Phil Labonte spoke about the relative absence of abrasive rock groups who challenge all the norms and offend parents, but are still adored by young fans. He said (as transcribed by BLABBERMOUTH.NET): "I think that the rebellious nature of music, a lot of times, historically, has come with the fact that the right kind of had cultural dominance in the United States, and I think since probably the mid-'90s, that has been changing, or has changed, so now the left having the cultural dominance and also having political dominance — because essentially the left really sets the tone for the U.S. and the right in the U.S. kind of responds… But because of that, I think that musicians have had less to rage against. I think musicians tend to feel like they align on the left more than they align on the right. And part of that's because of, I think, the narrative that surrounds the two. So a lot of people that are musicians that are on the left are kind of happy with the things that are being asserted assertively by government."

Labonte, who says he is "very pro individual liberty" and admits to liking the libertarian party "sometimes", also talked about how some ALL THAT REMAINS fans may be put off by his outspoken nature when it comes to his political views.

"Well, one thing is I never do any political stuff from the ALL THAT REMAINS page or anything," Labonte explained to host Jeremy Ryan Slate. "And I don't do any talking politically from stage. I think I've worn an actual political shirt on stage one time; I wore a Ron Paul shirt. So that right there helps. I don't make overt political statements or anything when it comes to ALL THAT REMAINS. ALL THAT REMAINS doesn't endorse candidates, endorse anything. ALL THAT REMAINS as a band, I think, did endorse decriminalizing marijuana; I think we officially said that. But I think that's a small thing."

He continued: "Now, there are definitely people that say, 'I don't like that guy, so I don't want to support the band' and stuff. And you get that no matter what you do. Especially today… Not that I think that ALL THAT REMAINS would get that, but you look at… If you're at a certain level of success, people start writing think pieces: 'Why hasn't this person said this?' or 'Why haven't they done that?' Now, I don't expect that to really happen particularly with a band, say, ALL THAT REMAINS size, but it's not that it couldn't happen.

"It's tough to abstain from that kind of stuff nowadays," Labonte added. "People will make assumptions about what you think and what you don't think. And even if I wasn't openly a libertarian kind of leaning guy, I would put up pictures of me shooting guns and people would make assumptions right there. It's, like, 'Oh, he owns guns. Blah blah blah. There you go.' Done deal. So I might as well articulate my positions in a way that people can make aspersions, if they'd like, but there are places where my opinions are consistently at least recorded. So you can say I don't think this or do think that, but I probably tweeted some crap about it on Twitter."

Two years ago, Labonte condemned the shutdown of then-president Donald Trump's social media accounts by Twitter, Facebook, and other platforms, claiming he was railing against "censorship" and the precedent that banning the president of the United States from social media may set moving forward. Labonte went so far as to pen a letter to his governor, saying that while he was "not a supporter of President Trump" and he "did not vote for [Trump], this looming threat of censorship is far bigger than one president's Twitter account. I believe, and fear, that the violence that occurred in Washington D.C. on January 6th is only a taste of what is likely to come in our country. The suppression of opinions deemed unacceptable and the efforts to censor are indicative of, what seem me to be, irreconcilable differences — and I worry that it could further add fuel to the fire."