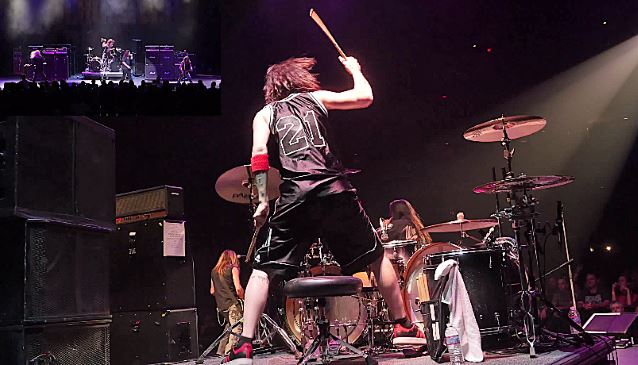 Drum-cam footage of SLAUGHTER and VINCE NEIL drummer Zoltan Chaney performing with SLAUGHTER at the May 30 Metal May-hem event in Phoenix, Arizona can be seen below (courtesy of Dave "Ravage" Stabley of Big Bad Dog Productions).

Chaney, who hails from southern Ohio, joined Neil's band in 2007, and has made a name for himself with a playing style that has been described as "a mix between Keith Moon and a Tasmanian Devil."

Asked how his drumming style has evolved over the years, Zoltan told TenMinuteInterviews.com last year: "No changes, really. Just get up and go for it and let the chocolates melt where they may!! For me, it's all about your attitude and desire that you put behind your passion that impacts, influences, and inspires all witnesses. If it's genuine, then it's undeniable. What you show up for… will show up!"

Chaney also spoke about unique showmanship style, explaining: "I don't have much planned when I take the stage, and that, for me, is the beauty of playing music as the platform of expression it allows you share."

He added: "I love what I do. I love sharing my passion and gift with the band on stage and then the crowd getting inspired, so this is why I do this."