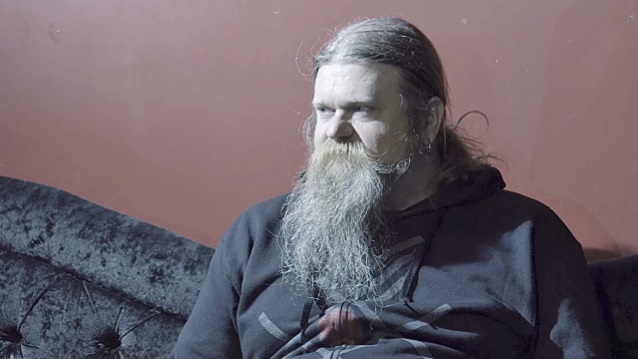 IVAR BJØRNSON On Response To ENSLAVED's 'E' Album: 'I Don't Think I've Seen This Level Of Enthusiasm For Many, Many Years'

Will Kent of "Will And Tom" conducted an interview with guitarist and songwriter Ivar Bjørnson of Norwegian progressive black avantgardists ENSLAVED prior to the band's November 19 show at Rock City in Nottingham, United Kingdom in support of OPETH. You can watch the entire chat below. A few excerpts follow (transcribed by BLABBERMOUTH.NET).

On what drew him to progressive rock:

Ivar: "We started out, we were pretty much like OPETH, very focused on the metal bit. But we were listening to quite a few things outside [of metal] and I guess what I was experiencing was wanting to have other sources of inspiration. I just felt it comes very easily, musically cannibalistic, if you just listen to the same kind of music you're writing and performing yourself. So, being, I guess, that's the threshold is to go from just listening to other things and being able to incorporate that into the stuff you actually write. I think that was a big awakening toward the end of the '90s, being able to include the favorite bands, the prog rock and everything, into the actual ENSLAVED music. It's a big thing for us."

On whether he was listening to bands like PINK FLOYD while ENSLAVED was getting their start as an extreme metal band in the early '90s:

Ivar: "PINK FLOYD has been there all the time. They're probably my favorite band and they were there all the way, from the beginning. I think there was a few years, you know how mono-focused it can become when you're a teenager. Obviously, this kind of extreme metal was taking most of the focus for a while. I guess, after a few years, as I said, we started going back into the other things we were already listening to and exploring. Today, I would say metal is probably the main genre still, for us, but I would say, more than half of the other music I'm listening to is, I guess music that you could call 'not metal related.'"

On the fact ENSLAVED has been active for 26 years:

Ivar: "It's always fun when you get a different perspective, I guess. Being on the road now, I think Nottingham, this is time we've been here, but some places on the tour we go, we were already on the first tour back in '95. When things like that happen, it gives you a bit of perspective. It's also fun because when you go back and think about how you viewed things back then, you didn't really think about it in those terms. You didn't think, like, 'Okay, this might be a full-time thing in the future.' You were just concerned with the next gig or trying to get a record deal. I think we were lucky and those bands who endure those first few years, I think you have to have that kind of mindset, where you don't define…it's way too early to define where it goes and stuff like that. It just takes away from the naïveté you need to have."

On the response to the band's new studio album, "E":

Ivar: "It's been really good. First, there was a few months of really positive buzz within, I guess, the industry, with the people who heard it and the journalists who had an early listen to it had some really strong feedback. It's been the same from the audience. I have to say, I don't think I've seen this level of enthusiasm for many, many years. I'm thinking maybe back to 2003, 2004, since. A lot of people mention that — it feels like a new start for the band. I guess it's natural with a little bit of lineup changes and everything. You asked if it's nerve-wracking with reception, yeah, it always is. It's the fourteenth album and it's always the same. Those few weeks after you release it and wait for the feedback from the non-professionals, just the listeners. That's always really scary. You can have the best reviews and you can have a disappointed fanbase or the other way around. For me, it's always really exciting and sometimes even scary, but I have to admit, but that's all it is. We'll still keep on going and do the same thing. I would be disappointed, but it doesn't really affect how I relate to it. I would just notice the discrepancy between my own experience of it and how other people feel about it. That's life. You shouldn't start doubting your own enthusiasm for something because other people don't like it. You get into some weird territory. You have to stick with your guns. Either you're happy with yourself or you're not."

"E" was released on October 13 via Nuclear Blast. The follow-up to 2015's "In Times" was recorded at Duper & Solslottet Studios in Bergen and was once again mixed and mastered by Jens Bogren at Fascination Street Studios in Örebro, Sweden.