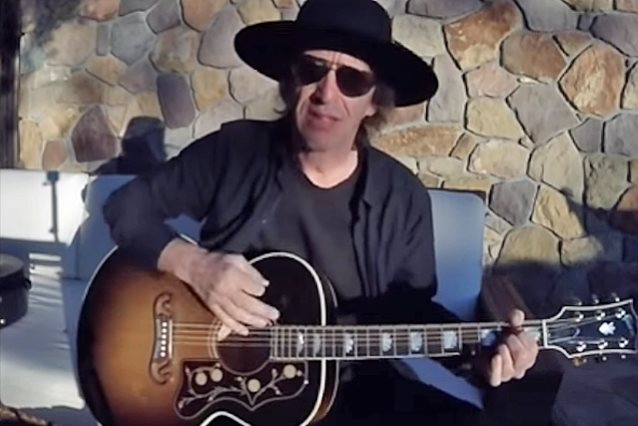 While GUNS N' ROSES' "Not In This Lifetime" tour features the "classic era" lineup of Rose, guitarist Slash and bassist Duff McKagan — with the occasional guest appearance by drummer Steven Adler — Rose told Brazil's Globo TV in a new interview that wasn't optimistic about Stradlin rejoining his former bandmates. "I don't really know what to say about Izzy," Axl said. "It's like you could have a conversation and think it's one way and the next day it's another way. And I'm not trying to take any shots at Izzy. It's just his thing is kind of his thing, whatever that is."

Stradlin took to his Twitter account earlier today to respond to Axl's comments, writing: "Bullshit. They didn't want to split the loot equally. Simple as that. Moving right along..."

Stradlin co-founded GUNS N' ROSES with childhood friend Axl Rose in 1985. He was major contributor to the band's classic 1987 debut LP "Appetite For Destruction" and the two "Use Your Illusion" albums in 1991, but quit the group that same year. The guitarist has maintained a low profile over the years, resurfacing periodically to make several surprise appearances at GUNS N' ROSES shows, including during the band's residency in Las Vegas in 2012.

Only Rose, Slash and McKagan from GN'R's "Appetite For Destruction"-era lineup have taken part in all the GUNS N' ROSES comeback shows since April. They were joined by drummer Frank Ferrer, keyboardist Dizzy Reed and guitarist Richard Fortus. Also appearing with them was second keyboardist Melissa Reese.

Bullshit
They didn't want to split the loot equally . Simple as that . Moving right along........