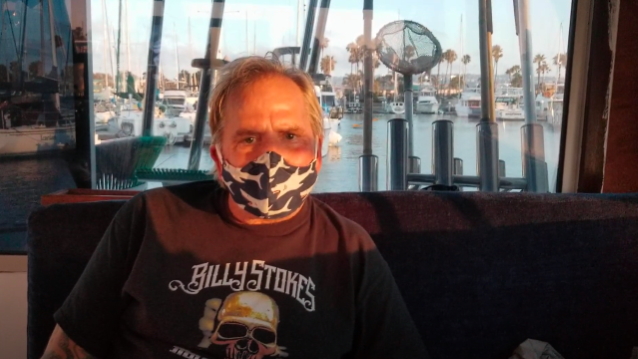 Ex-GREAT WHITE singer Jack Russell says that he had nothing to do with last week's concert in Dickinson, North Dakota by his former band.

Earlier today, Russell released a video message in which he clarified that he hasn't played under the name "GREAT WHITE" in more than a decade and revealed that he has not toured in over five months due to the coronavirus pandemic which is sweeping the globe.

"I just want it to be known that we take this COVID thing very, very seriously, and everybody should be wearing a mask and people should be social distancing. And if you're not doing that, you're not doing your part. So, take it to task and wear a mask."

On Saturday night, the Kendall-led GREAT WHITE apologized for the conditions at the North Dakota show, saying that "the promoter and staff assured us of the safety precautions. Our intent was simply to perform our gig, outside, in a welcoming, small town. We value the health and safety of each and every one of our fans, as well as our American and global community."

GREAT WHITE's next show is scheduled for August 7 at Fort Madison, Iowa's Riverfest FM festival, which is "absolutely happening" despite the pandemic. "With all of the uncertainty, it would have been easy to throw in the towel on this year, but we firmly believe that 'If we rock it, they will come' and boy, do we have a line-up that is prepared to do just that," the festival organizers wrote on Facebook.