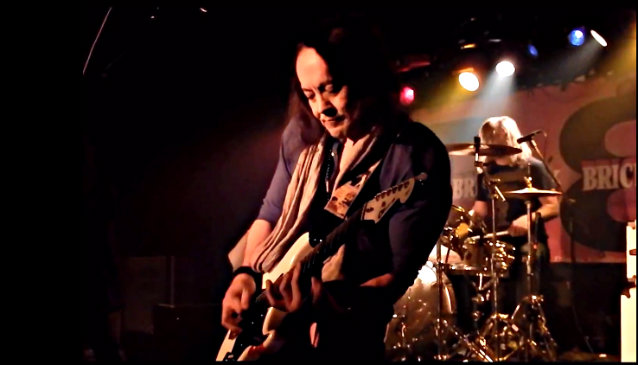 Ruben Mosqueda of MetalTitans.com recently conducted an interview with former OZZY OSBOURNE/BADLANDS and current RED DRAGON CARTEL guitarist Jake E. Lee. A couple of excerpts from the chat follow below.

MetalTitans.com: The first RED DRAGON CARTEL show reminds me of a football team that has prepared for the game, they come out and they get out scored. Not what they envisioned in the preparation leading up to the game.

MetalTitans.com: In the footage that I have seen from the Whisky — you look to be having fun. That sets the tone for future shows leading to the release of the album.

Jake E. Lee: Despite the difficulties we had the night of the first show, we're still having fun. It's been a long time since I played in that big of a crowd. While Darren [James Smith, RED DRAGON CARTEL singer] might have not won over a lot of fans that night, every time I looked out into the audience and locked eye with someone, they look at me and scream, "I love you, Jake!" I was still having a great time.

MetalTitans: The RED DRAGON CARTEL album definitely needs several listens and it grows on you with each listen. I like the sequencing; you put your best foot forward with "Deceived", "Shout it Out" and "Feeder". I don't know if that was initially the thought, but "Deceived", to me, is the track that would appeal instantly to the "Jake-era OZZY OSBOURNE" [fans] I like the furious Jake E. Lee trademark riff that opens the track.

Jake E. Lee: Yeah, that ("Deceived") was the last some we wrote for the record, but it's also very "Bark At The Moon" sounding. I remember I was in the studio and I heard "Bark At The Moon". I hadn't heard it in a long time it has a very distinct riff to it. I hadn't written a song like that since. I wanted to write a song that was reminiscent of "Bark At The Moon". The feedback that I've heard from people that have the album is that there are songs that grab you right away; "Deceived", "Feeder" and maybe "Shout It Out". There are songs that start growing on you that you might have glossed over at first listen. I am happy that the record is like that — people will listen to it multiple times and think, "Oh, I really listen to that song and now I really like it." It's one of those kinds of records, I think.

MetalTitans.com: There's a track titled "Wasted" which features former IRON MAIDEN singer Paul Di'Anno — that's really an incredible track. How did you get Di'Anno to sing on that?

Jake E. Lee: That's interesting. If you can believe this, I haven't even met him! [laughs] We were trying to select singers to sing on some tracks and we couldn't think of anyone. I did think of Steven Tyler [AEROSMITH] as my first choice but he's not going to do it! [laughs] Listen, even if he knows who I am, he's not doing it — he's a pretty busy guy. So we're trying to figure out who we could get to sing it. Brent Fitz (drummer) walked into the studio and just stood there casually listening to the track and said "Paul Di'Anno." I thought that was weird, because I hadn't even heard his name in what seemed to be like 25 years. I looked at him with this outstanished look and said, "Where in the world did you come up with that name?" Again, in a casual manner, he said, "I was listening to some early MAIDEN on my way over here." [laughs] I love IRON MAIDEN, but the early stuff with IRON MAIDEN is more punk and violent sounding to me. I love those records the best. It was a great choice, I think, and it was totally because of Fitz. We put word on the Internet that we were looking to find him. We eventually found him and we asked him if he would be interested in singing on the record. He asked for us to send him the tracks. So we did, and he liked it. He sang on it and sent it back. I think he sounds great on that. I never met the guy, but I hope to at some point to thank him for doing this personally.

MetalTitans.com: Surely during the time that you were in early retirement from music, you must have had knowledge of people's interest in want to know about your whereabouts. It wasn't that uncommon to read on message boards threads with the heading: "Where's Jake E. Lee?"

Jake E. Lee: I would occasionally Google my name to look for the latest rumors about me because it was very amusing. [laughs] I read all kinds of stuff. I was a cripple, I remember that I was now walking around with a cane. I was homeless and I was sleeping at my friend's guitar shop because I had nowhere to go! [laughs] It was funny. It really cracked me up. It was great to be able to do that.

Read the entire interview at MetalTitans.com.