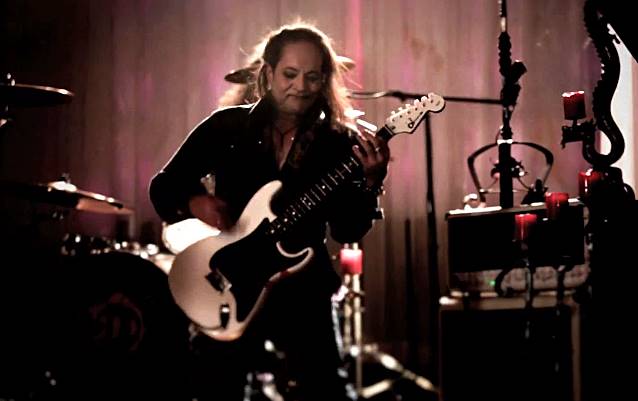 "Shout It Out", the new video from RED DRAGON CARTEL, the band led by former OZZY OSBOURNE and BADLANDS guitarist Jake E. Lee, can be seen below. The song is taken from RED DRAGON CARTEL's self-titled debut album, which sold around 5,000 copies in the United States in its first week of release to debut at position No. 69 on The Billboard 200 chart. Released on January 28 via Frontiers Records, the CD was recorded at Las Vegas' The Hideout Recording Studio — owned and operated by Kevin Churko (OZZY OSBOURNE, FIVE FINGER DEATH PUNCH, IN THIS MOMENT) — and was produced by R. Bernard Mann (a.k.a. Ronnie Mancuso) and Jake E. Lee, and executive-produced, mixed and mastered by Churko.

Jake E. Lee is best known for his work in BADLANDS and as guitarist for OZZY OSBOURNE on "Bark At The Moon" and "The Ultimate Sin" albums.

From the opening riff of "Deceived" to final sustained piano chord of "Exquisite Tenderness", it is clear RED DRAGON CARTEL has created a hard rock gem. Infectious songs such as "Shout It Out", "Wasted" and "Slave" showcase the band's ability to write memorable hooks and vocal melodies.

JAKE E. LEE'S RED DRAGON CARTEL's setlist includes new material like the singles "Feeder" and "Deceived", as well as major hits from Jake E. Lee's glorious past: "Bark At The Moon", "The Ultimate Sin" and "Rock 'N' Roll Rebel" (all originally recorded by OZZY OSBOURNE),as well as "Shine On" and "High Wire" (BADLANDS).