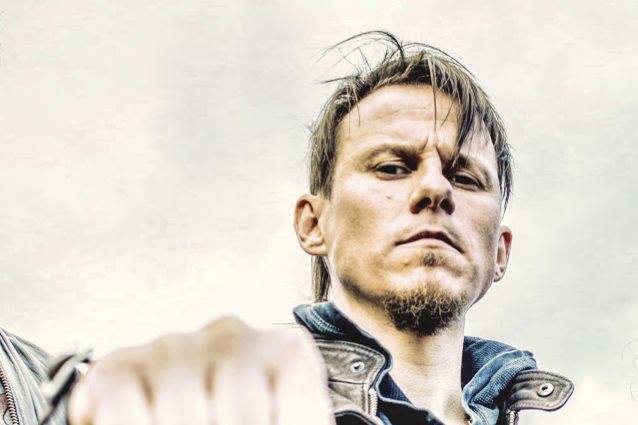 JAKE E On Departure From AMARANTHE: 'We Came To A Point Where Everything Got Centered Around One Person'

Dead Rhetoric: I don't want to get too far into it, because I'd rather talk about CYHRA, but the impression that I got from when you said that you were done with AMARANTHE, was that it was more about you not having your heart in it, from the way that the band had changed in the last few albums.

Jake: "I don't want to go too deep into it either. I don't want to make any situations with former bandmates. But I started the band together with Olof [Mörck, guitar]. We had a vision, but we came to a point where everything got centered around one person. I was always trying to make this band feeling out of everything, and all of a sudden it was a one-man show. As a founder of the band, I could have just told everyone else to go fuck themselves if I wanted to, but that's not what I wanted to do. But I felt that if I was the one feeling the way I felt, and the rest of the band felt that it was the way that they wanted to do it, I would be an asshole if I told everyone to go my way. So I just said, 'Okay, I'll leave you to it and I'll go do my own thing instead.' I think that I was actually the nice guy — I did a nice thing by leaving the band."

Dead Rhetoric: So AMARANTHE had the three-singer aspect to it, but what do you feel defines CYHRA as a band?

Jake: "It's all about friendship and dedication towards the same goal. CYHRA is something that I've never experienced before. Four guys… now we are five with Euge coming in, but we have a clear goal. We do this for ourselves. We want to be the biggest band in the world if we can, of course, but that's not what drives us. We are five guys that do this because we love to play music and we want to go in the same direction. That was the main feeling that Jesper and I had when we started to take the other guys in. We wanted people around us that think like us and want the same things as us. It means so much — you are getting older and you are putting all the chips on black. It could go south, it could go the wrong way, but at least we tried to do the right thing here. And we are having a lot of fun. That's what means the most to us."

Dead Rhetoric: Even if you are getting older, there's still that energy and excitement when you first start something. Did that kind of tap into what you were creating with this first album?

Jake: "The funny thing is, for the first time in my life, or at least the first time in many years, I have been looking forward to every step in the process. You write songs, then you record songs, then you go to the studio to rerecord everything because it's going to be on the album. Then you have to do a video, and you do all the press. Before, I've looked at it like, 'Oh fuck!' But now, I love it, and Jesper loves it. All of us — we have been like, 'Yes! Soon we are going to record the album! Yes, we are going to record a video!' There's been all this excitement all the time."

Jesper: "Yes, except photo sessions. I hate them for some reason. They are so boring. It's like, 'Just take the fucking picture!' [Laughs] Some people take a few hours with it. We had a lucky shot. The first ever photo of the band is actually included on the vinyl.

Jake: "Yes, it's included with the CD as well. We've been working with [Swedish director] Patric Ullaeus, and he's a genius."

Strömblad: "But now we have a new member so we have to like, cut them into it."