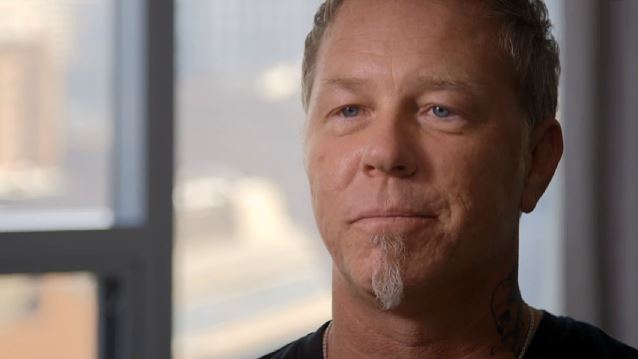 JAMES HETFIELD On Next METALLICA Album: 'We're Super Stoked About It'

James Hetfield has confirmed that METALLICA has completed the recording phase of its long-awaited tenth studio album for a late 2016 release. He told NBC Sports on June 6 before Game 4 of the Stanley Cup Final between the San Jose Sharks and Pittsburgh Penguins in San Jose, California (see video below): "We're mixing it now, so hopefully by fall it'll be out and hitting people's ears. We're super stoked about it. It's been a long time coming, and, you know, this is what we do. We love playing. And the next album is exactly what it's supposed to be. So we're excited about it."

METALLICA drummer Lars Ulrich said in a recent interview with Metal Forces that June is the month in which the band will begin deciding on what to call the album and how they plan to release it to the public. The disc will follow up 2008's "Death Magnetic" and marks the longest gap between studio albums in the band's 33-year recording history.

METALLICA worked on the disc on and off over the past two years, in between other projects. Ulrich told The Pulse Of Radio that the band prefers that approach. "If we had to sit there and, 'Okay, boys, now you write for the rest of the year and then you spend the next year after that recording' — I would pull what seven hairs I have left, I'd pull those out and rather just stab myself in the eye with nails or whatever," he said. "I just, I couldn't do it. I mean, we love the position that we're in to be able to come and go between all these different projects. That's what keeps us alive."

METALLICA has been recording at its headquarters in San Rafael, California with Greg Fidelman, who was the engineer on "Death Magnetic".

The band in 2014 released a new song, "Lords Of Summer - First Pass Version", on iTunes via Blackened Recordings. Ulrich told Rolling Stone that the track, which was first performed in March of that year at a concert in Bogota, Colombia, was "fairly representative of where our creative headspace is at right now. It's one of those things that's like, 'Here, we're writing and we're creating.'"