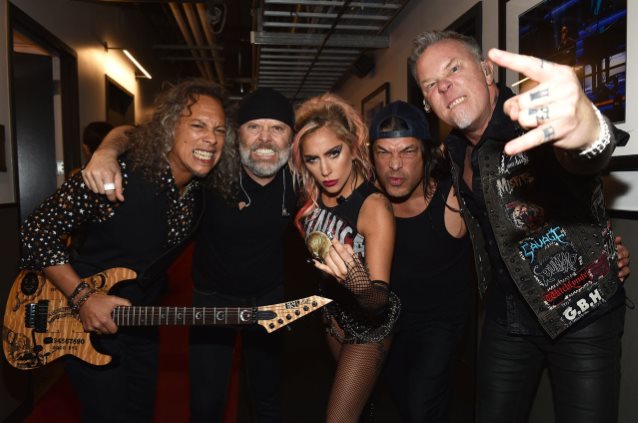 James Hetfield says that Lady Gaga's "energy was very, very exciting" when METALLICA collaborated with the pop superstar at this year's Grammy Awards.

METALLICA's appearance with Gaga at the 59th annual event in Los Angeles on February 12 turned into something of a disaster when the Grammy sound crew did not turn Hetfield's mic on, forcing him to share the mic with Gaga after the first verse and chorus.

Hetfield spoke about the Grammys mishap during an interview with journalist Claudio Vergara of the Chilean newspaper La Tercera, conducted before METALLICA's April 1 appearance at Lollapalooza Chile in Santiago. He said: "The actual show, live on TV, I was very angry, yes. All the rehearsals, everything was perfect; up to there, everything was working. But, you know, out of my control. Something happened… I don't know what happened. But the silver lining is that Lady Gaga and me were singing closer, and [there] was a little more collaboration. She's an amazing person — very talented."

He continued: "When we were asked to play the Grammys, we said, 'Of course,' we said, 'Yes.' But they need you to collaborate with somebody; they want to make it interesting. So I'm glad she was available to do it. She has a lot of integrity as an artist, [and she's] very creative."

Asked if he would perform again at the Grammy Awards in the future, Hetfield said: "Sure. Why not? I will have two or three microphones right next to each other, yes. [Laughs]"

Hetfield was also asked if he would want to collaborate with Lady Gaga again or another pop artist in some capacity. He responded: "No. But even just talking with her, being around her, her energy was very, very exciting. She has lots of ideas, and she likes to push the boundaries like we do. So it was a good fit."

Shortly after this year's Grammy Awards, METALLICA drummer Lars Ulrich told Rolling Stone that Gaga was the "quintessential perfect fifth member of this band," saying, "Her voice, her attitude, her outlook on everything is so awesome. [The performance] was so effortless and organic and she just has the spirit of hard rock and metal flowing through her veins. It comes really easy for her. There's nothing contrived; she just has this super warm, easy energy."

(Special thanks to Claudio Vergara of La Tercera for providing BLABBERMOUTH.NET with the original audio of the Hetfield interview.)