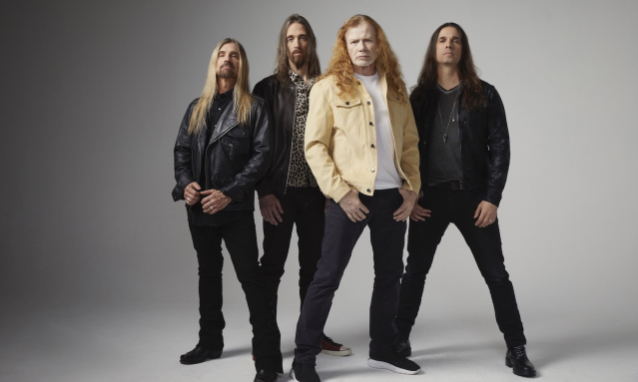 JAMES LOMENZO On His Return To MEGADETH After DAVID ELLEFSON's Sex Video Scandal: 'I Didn't See That Coming Again'

James LoMenzo says that he could not have foreseen his return to MEGADETH as a permanent member of the band.

LoMenzo was MEGADETH's bass player in the mid-2000s and recently stepped back in as a touring member for "The Metal Tour Of The Year". James officially rejoined the MEGADETH family in May.

Asked in a new interview with Andrew DiCecco of Vinyl Writer Music how his return to MEGADETH came about, James said: "Well, you know, here's the thing; It's funny because the other day I was backstage, and I go, 'You know, I'm goin' on two years [back in MEGADETH] here.' I didn't see that coming again. It was a total — not a complete surprise, but a surprise."

Referencing the sex video scandal that led to Ellefson's exit from MEGADETH, LoMenzo said: "When I saw the stuff that was going on with MEGADETH, it was all over the Internet — we're all connected — I looked at it and I thought to myself, 'Hmm. I wonder if I'll get a phone call.' But at that time I kind of thought, 'You know what? They're gonna resolve this, or whatever is goin' on is gonna fix itself.' So I kind of went that way. Anyway, it did not fix itself, and so suddenly, MEGADETH was in need of a bass player, and my phone blew up. I mean, everybody I knew would go, 'Well, did you get the call? Do you know anything yet?'"

He continued: "I had been doin' all kinds of gigs for years since the last time I was in MEGADETH in 2007, so at that time, I was playing with John Fogerty. And that was like, you know, long weekend gigs, and I was diggin' the hell out of it. I was playing next to [drummer] Kenny Aronoff, and we'd play all these great places and stuff. So, I was fine; I wasn't looking for a gig. But I did consider that I might get a phone call sometime or I might not. So, then when it was discovered that [MEGADETH] was recording with another bass player, oddly enough — I know this may sound strange to some people — I was like, 'Whew.' And the reason being is not that I don't ever wanna play with MEGADETH again — as you can see, I am — but that was gonna be another big change in my life, just like joining MEGADETH for the first time was a big change in my life. And going from what my life had become to what it could become had I joined MEGADETH again, I had some trepidation."

James added: "So, I did finally get a phone call one morning. And I was actually playing a gig — I can't remember exactly where — but it was odd because it was the management team. They called up, and they said, 'Dave [Mustaine, MEGADETH leader] would love you to consider helping out and getting us through the tour that's coming up.' And I thought, 'That's kind of perfect because we can get our feet wet and I can kind of cozy into it.' But I would have had to leave some commitments that I had, so I needed to work that out first, which I did. And everyone was very gracious about it on the other end. So, taking that into account, then I spoke to Dave about it, and he was really very, very excited and cool about it. He was very, like, 'Dude, it'll be great. If you wanna do it, this would really help out. We've got 'The Metal Tour Of The Year' coming up.' Like I said, I had trepidation, but the trepidation was this: I could play the MEGADETH songs — I knew it would take me a week or so to kind of bone up and get my fingers around it again — but the stage thing, man. Four guys on stage, filling that stage and entertaining the headbangers. Becoming that again, you know? That was the only thing. So, I immediately went to YouTube, as you do these days, and [MEGADETH] had a video that we put out called 'Blood On The Water'. It was in San Diego, and it was after I had been in the band for a year or so — maybe a couple of years — but by that time, I was firmly entrenched as a band member. So I said, 'Let me see where we left off.' And I was looking at this thing, and I was going, 'Yeah, okay. So, I'm gonna have to take this thing by storm.' We were pretty active back then. So, yeah, I put all that into my head, and I factored it in. You know, that was it — three weeks and a half of intensive, at-home reminiscing. It came to me a lot quicker than I thought it would because I hadn't really thought about the songs too much since. I've played in a lot of bands, right? So, if I were to hold on to each and every catalog and play them every day, I wouldn't have time to practice them, first of all. And secondly, there just isn't enough space in this noggin' of mine to do it. And that's always been my M.O.: move on to the next thing and get really focused on that. So, now, it was time to refocus on MEGADETH.

"I got out to Nashville, and man, when I showed up at that rehearsal place… I met Dirk [Verbeuren, MEGADETH drummer] on the plane — we have a mutual friend, so we were kind of bonding on that and talking on the plane. And so the first day we go in there, Dave was tied up doing something, so he didn't come down that day, and Kiko [Loureiro, MEGADETH guitarist] wasn't in from [his home in] Finland yet. So, it was [Dirk] and I and the crew putting all the gear together, so it was a perfect time for us to get to know each other musically. So, there was Dirk, and we have this enormous platform that he's been on now since last year — he's, like, nine feet in the air, if anybody's seen it. It's pretty exciting; it reminds me of old JUDAS PRIEST, you know? And so, this is gonna kinda be weird, 'cause we're gonna play together, and he's all the way up there, and I'm all the way down there. I'm old school; I like to be in the John Paul Jones position to John Bonham. I like to be eyeball-to-eyeball with the drummer; that's the most fun. But anyway, this was not to be. So, we started going through some of the songs, and my God, as soon as he hit the bass drum and the snare, it was more solid than I ever remember the music. And I think that's a tribute to his personal style. We ran through practically the whole set, just him and I — no cue music, nothing; just out of motor memory. It was astounding, and I was, like, 'This is gonna be great.' So, that's kind of the way it all started up. Dave came by the next day, Kiko showed up the next day, and we just ran through music. It was almost like we were ready to go."

MEGADETH's latest album, "The Sick, The Dying… And The Dead!", arrived on September 2 via UMe. The bass tracks on the LP were laid down by TESTAMENT's Steve DiGiorgio.