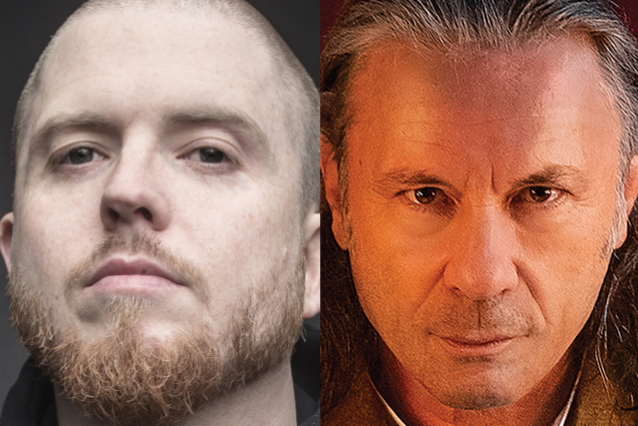 HATEBREED's Jamey Jasta has called out Bruce Dickinson for berating fans for smoking weed during an IRON MAIDEN concert.

At MAIDEN's September 21 show at the Honda Center in Anaheim, California, the 64-year-old Dickinson took a few minutes to excoriate a handful of people who were allegedly smoking weed right in front of him and his bandmates while they were playing.

"I don't know what it is," the singer told the crowd, as seen in a viral video on YouTube. "There's so many fucking people smoking so much fucking dope down here, I'm amazed you can even see. Poor old Steve [Harris, MAIDEN bassist]. I don't know if you know, but he absolutely fucking hates marijuana and the smell of it, all right? So when he's trying to play bass, it fucks him up. It fucks me up. I'm a singer, all right? So duh.

"I would just ask for a tiny bit of respect," he added. "If you want to go get completely stoned out of your fucking mind, go out the back and do it. All right? Otherwise you're going to end up like this fucking knucklehead here going 'uhhhh.'"

A week later, at MAIDEN's concert at Climate Pledge Arena in Seattle, Washington, Dickinson similarly blasted the pot-smoking fans in the audience, saying: "The smell of the crowd. Oh, I love the smell of sweaty human fucking bodies. It's the weird shit that you smoke that fucks me up. And the bass player. We fucking hate it. Please, if you're gonna go get fucking wrecked, fucking wreck yourself out the back and then come back, all right? 'Cause we are having a fucking great time up here and I wanna enjoy every minute of it. I don't wanna do [adopts stoner drawl], 'Where the fuck am I, dude?'"

This is not the first time Bruce has called out fans for smoking marijuana at MAIDEN's concerts. Back in 2008, Dickinson shouted at a pot smoker in the crowd, saying: "Would you please put that fucking shit out?" Bruce then identified the person in the crowd and added "I really hate the stink of that," explaining that "My lungs are trying to work up here, dude."

Earlier today, Jasta, whose band toured with RISE TO REMAIN, the group once fronted by Bruce's son Austin, more than a decade ago, took to his Twitter to write the following: "Bruce Dickinson if you read this. Hi. You're a great vocalist/frontman. We took your son's band on tour. Hope you are well. Just so ya know. Lots of people like to smoke weed at outdoor concerts. WHAT DOESN'T ANNOY YOU BRO?!?! Besides flying planes? Lol you might need a puff or 2".

Dickinson has a history of publicly admonishing fans and security at MAIDEN's concerts if he feels like they are out of line. At the band's September 22 show in Anaheim, he grabbed an uninvited stage invader by the shirt and dragged him to the side where he was escorted off by the MAIDEN stage security. In July, the singer made headlines when he blasted a MAIDEN fan as a "Greek cunt" and a "fucking cocksucker" for lighting a flare during the band's concert in Athens, Greece. Back in 2019, he stopped a MAIDEN show midway through to slam a Tacoma, Washington venue for a violent and bloody incident in the crowd for which he claimed the venue's security was to blame. In 2012, Bruce called out a fan at a Indianapolis show who had been texting for three straight songs.

Bruce Dickinson if you read this. Hi. You’re a great vocalist/frontman. We took your son’s band on tour. Hope you are well. Just so ya know. Lots of people like to smoke weed at outdoor concerts. WHAT DOESN’T ANNOY YOU BRO?!?! Besides flying planes? lol you might need a puff or 2