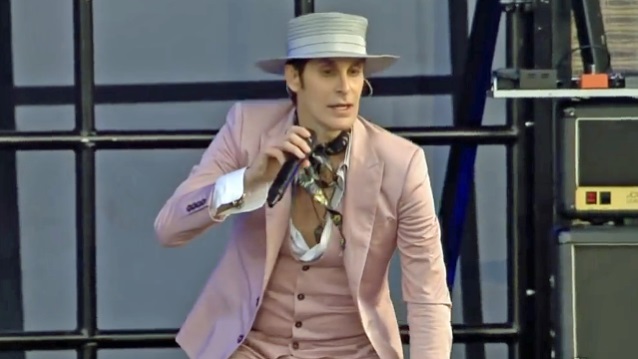 According to The Pulse Of Radio, JANE'S ADDICTION frontman Perry Farrell said in an interview on "The Jason Ellis Show" that he recently got his dog high on marijuana by accident. The singer explained: "I had to bring my dog to the vet two days ago. He got a hold of a roach. You ever see a dog that's high on weed? Me neither. I didn't know what the hell was wrong with my dog. He was wobbling, and his back didn't match up to his front. He was walking and he couldn't get his hind legs to walk with his front legs."

Perry added that it was "good weed" and that the dog got hold of it after Farrell inadvertently left the roach on a table in the backyard. He recalled: "Later on that afternoon I take my dog for a walk, for the first time in his life I put the collar on him. I'm trying to pull this dog out of this crate, and he won't go. So I'm yanking him by the neck like I'm hanging him. He's like, 'Fuck no, I'm not going!'"

Perry continued: "So he's trying to walk, his back is banging to the wall, and he's looking at me real weird. I said to my wife, 'Something's wrong, I think Seymour the neighbor poisoned him because he's barking.'"

Farrell took the dog to the vet, who ruled out rat poison. The vocalist said: "She goes, 'Any chance he could have been engaged in marijuana?' I go, 'Oh! That's what it was.'"

JANE'S ADDICTION will play at Belly Up in Aspen, Colorado on Saturday (December 30) and Sunday (December 31) to ring in the New Year.