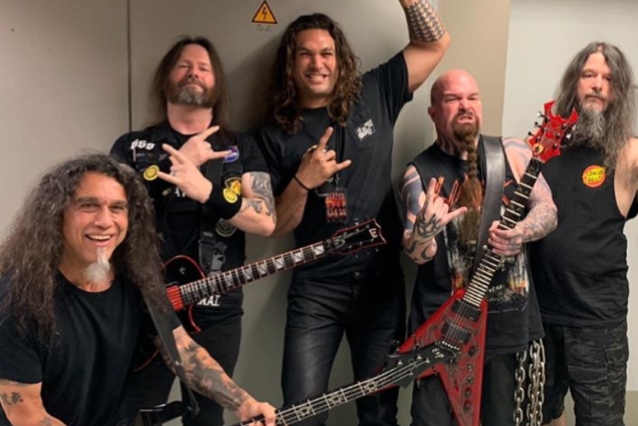 Jason Momoa, the hulking star of the superhero film "Aquaman", attended last night's concert by SLAYER and ANTHRAX in Budapest, Hungary. The 39-year-old "Game Of Thrones" actor, who has been open about his love of heavy metal, later took to his Instagram to proclaim the night ""one of the greatest shows of my life" and described the experience of hanging out backstage with the members of the two bands as a "childhood dream." He added: "My mind was blown. Meeting your idols and they're fucking amazing. So thankful, so grateful."

ANTHRAX drummer Charlie Benante posted his own snapshot from the evening of drinking with Khal Drago, writing on Instagram: "When #KhalDrogocomes to your show, you immediately go into @gameofthronestalk!" Meanwhile, SLAYER guitarist Gary Holt refered to Momoa as the "Coolest dude on EARTH!!!"

Last year, Momoa revealed that METALLICA and TOOL served as inspiration for his character in "Aquaman", telling Metal Hammer in an interview: "Aquaman's pretty metal. I know no one thinks that, but Aquaman's metal."

He singled out METALLICA's debut album, "Kill 'Em All", and the TOOL song "Ticks And Leeches" as two pieces of music that influenced his portrayal of Arthur Curry's alter-ego.

"There's a lot of [BLACK] SABBATH in there too," Momoa added.

Back in 2011, Momoa discussed the heavy metal influences that prepped him up for his role as the legendary barbarian in "Conan". "There's a song by PANTERA called 'Walk' that is definitely the 'Conan song,'" he said. "A lot of old METALLICA and RAGE AGAINST THE MACHINE always helps."

❤️❤️❤️❤️❤️❤️love metal so much fire it was one of the greatest shows of my life childhood dream @slayerbandofficial @anthrax my mind was blown Meeting your idols and they’re fucking amazing So thankful so grateful. Aloha j. #slayerforlife #anthrax #slayer #thatsawrap #dunedone

So look who drops in for some thrash metal tonight! Motherfucking Khal Drogo, AKA @prideofgypsies , Jason Momoa! Coolest dude on EARTH!!! FEAR THE DOTHRAKI!!!!

The King and the Khal. 🤘🏼 @prideofgypsies