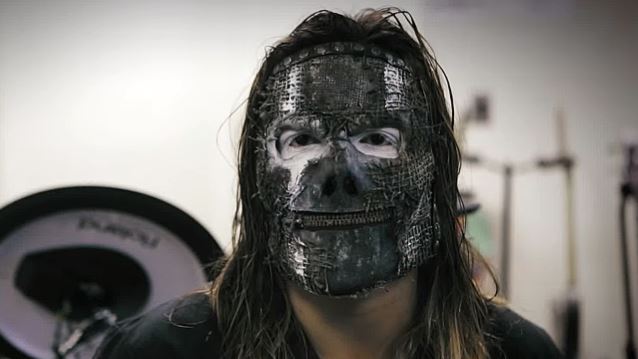 JAY WEINBERG: SLIPKNOT's Early Music 'Was The Soundtrack To My Life'

During last week's appearance on "Trunk Nation", Eddie Trunk's show on SiriusXM channel Volume (106),SLIPKNOT drummer Jay Weinberg spoke about his audition for the band and the process of making the group's latest album, ".5: The Gray Chapter".

Weinberg, 26, discovered SLIPKNOT when he was a pre-teen, through his father Max, of Bruce Springsteen's E STREET BAND, and leader of the house band on Conan O'Brien's talk show. He was hooked immediately and was a huge fan of SLIPKNOT by the time he was invited to Los Angeles to try out as replacement for Joey Jordison in 2013.

Weinberg told "Trunk Nation": "[SLIPKNOT] was on 'Conan' when I was about ten years old, promoting the record at the time, and they were coming through on Ozzfest. And my dad had never seen a band like this play. And he came home and he was, like, 'We've gotta check out this band. You've gotta see them. They blew my mind. I met them. They want us to come to a show,' talking [about] the whole family. And [he was like], 'We've gotta go. You've gotta see this band. It's insane.'"

He continued: "My musical experience up until that point was THE WHO, THE [ROLLING] STONES, THE BEATLES, Bob Dylan and THE BAND; that's what I knew of music. I think I was starting to get into BLINK-182 or something like that. So, being exposed to that, and we went to the show, and I cracked my skull wide open, it taught me that that kind of music was out there, and it made a beeline in my heart, because it was just exactly what I was feeling. And so then I did my research about all those bands."

Regarding how his SLIPKNOT audition came about, Weinberg said: "We met sixteen years ago at Ozzfest '01, and they were so busy at the time that they would be through the area — through the New Jersey, New York, Philadelphia area — several times a year.

"I was just a weird kid figuring out his own place in the world, really identified with this music, and I was really fortunate, really lucky that I was able to meet those guys that way, establish a friendship in that way, and we just stayed connected over the years," he continued. "I'd see them several times a year, because they were touring so much, and every time I'd come out to a show, I'd done a little bit more research in music, and now I'm finding out who SLAYER is, and who VENOM is, and now I'm into MASTODON, and it just goes further and further and further. And they could see that I'm learning about this community that exists all over the world, and I'm starting to put that together for myself. And, yeah, we ended up becoming good friends over the last sixteen years."

The drummer went on to say: "In short, I got a phone call: 'Come over here.' I had no idea what I was coming out to California for. It was, basically, 'There's a drum set. We're gonna bring in SLIPKNOT in twenty minutes. You're gonna audition for SLIPKNOT.' And that's it."

Weinberg and "the majority of SLIPKNOT" played around twenty of the band's songs that first day in December 2013, including "Before I Forget", "Duality" and "Disasterpiece".

"Dissecting every tiny little miscroscopic detail of those [early SLIPKNOT] records, because those records meant so much to me in my development as a musician and just growing up, I paid a lot of attention to the music they made, and it really was the soundtrack to my life," he said.

"Having the opportunity to play those songs with those guys was… I was drawing on muscle memory from when I was 14, trying to just learn how to play the instrument and playing along to those records. And so a lot of the first day of us playing together was drawing on that memory from ten years prior. And yeah, it was that, combined with an attitude of just, like… I never thought that this would happen. You don't plan that eventually that'll happen, but just when it's happening, it's, like, 'I'm just gonna enjoy this day, this moment, playing this music with these guys. Whatever comes of it comes of it, but if nothing comes of it, I have this day when I experienced this. And that was just kind of the attitude of the day. We ran through, like, twenty or twenty-something songs from the band's back catalog, and the next day, [they were] like, 'All right. You wanna work on some new stuff?'"

For the first few months after the release of ".5: The Gray Chapter", the members of SLIPKNOT had declined to name the musicians who were playing drums and bass on their tour, despite the fact that their identities were revealed as Weinberg and bassist Alessandro "Vman" Venturella by a disgruntled former drumtech for SLIPKNOT who posted a picture of a backstage call sheet on Instagram.

Weinberg now says that he never had a problem with not being immediately announced as SLIPKNOT's new drummer. "I can equate it to, back in 2004, when I was one of those kids who wanted any shred of information about the band's third record that was gonna come out, and we got nothing for months, what felt like years," he explained. "And we got no information. As much as you tried to find out anything about that record coming out, you couldn't find out anything, and I tried. I was diligent about finding out what I could about that record, and you couldn't find out anything. And it pissed me off, and it made me more and more chomping at the bit. So when you eventually receive some kind of information, or the first song was made available, it really felt like a reward — like you had been rewarded for your patience, of wanting to learn, wanting to see inside, the kind of peek behind the curtain, so to speak. And so I can kind of equate it to that, because it was like this piece of the puzzle that people hadn't figured out. And they're looking, it's, like, 'I think that's him. His wrist looks weird in this photo. I think that's him.' So it became a really interesting way that also disassociated the person from the music and just made people focus on the record that we had just worked on for about a year. Because that was the most important thing — that we have this new music coming out, we're starting these tours. Focus on that — don't focus on the individuals."