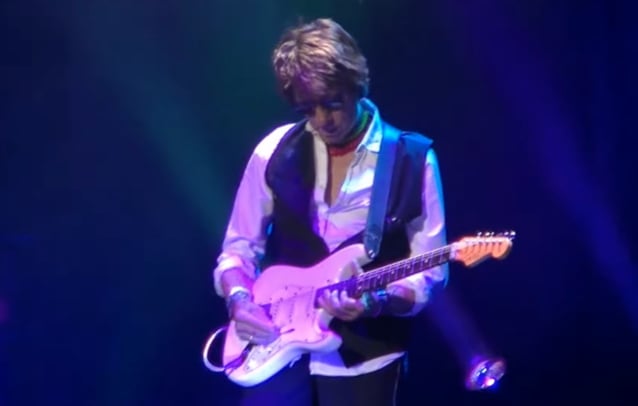 Jeff Beck will tour the U.S. this fall in support of the newly released, highly anticipated musical collaboration with Johnny Depp, "18". The tour will kick off on September 23 in Del Valle, Texas, where Beck will share the bill for the first six shows with longtime musical friends ZZ TOP. Beck will then continue on for his headline dates in Atlanta on October 1 continuing up the East Coast, hitting D.C., Boston and the New York area before heading west with several Midwest stops before heading to the West Coast. Currently, the tour will wind up in Reno, Nevada on November 12.

Pre-sale tickets will be available on tomorrow (Tuesday, August 16) at 10 a.m. local time (password: beck18) with public on-sale Friday, August 19. VIP packages also available. Full itinerary is below with all dates subject to change and more dates to be announced.

The tour will focus on the new album as well as explore Beck's legendary career through instrumentals like "You Know You Know", "A Day In The Life" and "Brush With The Blues". The tour will include Beck's current band: bassist Rhonda Smith, drummer Anika Nilles and keyboardist Robert Stevenson.

Having cultivated one of the most influential careers in rock history, Beck is universally acknowledged as one of the most talented and significant guitarists in the world, and has played alongside some of the greatest artists of rock, blues and jazz.

Over the course of his distinguished 50-plus-year music career, he has earned an incredible eight Grammy Awards, been ranked by Rolling Stone as one of the "100 Greatest Guitarists Of All Time," and been inducted into the Rock And Roll Hall Of Fame twice — once as a member of THE YARDBIRDS and again as a solo artist. In the summer of 2016, the guitar virtuoso celebrated his five decades of music with an extraordinary concert at the famous Hollywood Bowl.

Beck famously replaced Eric Clapton as THE YARDBIRDS' lead guitarist in 1965 and later went on to form THE JEFF BECK GROUP, which featured Rod Stewart on vocals and Ron Wood on bass. Their two albums — "Truth" (1968) and "Beck-Ola" (1969) — would become musical touchstones for hard rockers in the years to come.

The constantly evolving Beck's next move — a power trio with bassist Tim Bogert and drummer Carmine Appice, which released "Beck, Bogert And Appice" (1973),once again shattered people's preconceptions of what a rock guitarist was supposed to sound like.

1985's "Flash" kept Beck in the spotlight as he earned the "Best Rock Instrumental" Grammy for the song "Escape". A second Grammy came with Jeff Beck's "Guitar Shop" with Terry Bozzio and Tony Hymas, and a third for "Dirty Mind" from the "You Had It Coming" album in 2001. 2009 saw the release of the platinum-selling "Performing This Week… Live at Ronnie Scott's", which earned a Grammy for "A Day In The Life".

His "Rock 'N' Roll Party (Honoring Les Paul)" album was nominated for a 2012 Grammy Award for "Best Rock Album". In 2016 he released "Loud Hailer" and in 2017 "Jeff Beck: Live At The Hollywood Bowl" was released, both to widespread critical acclaim.