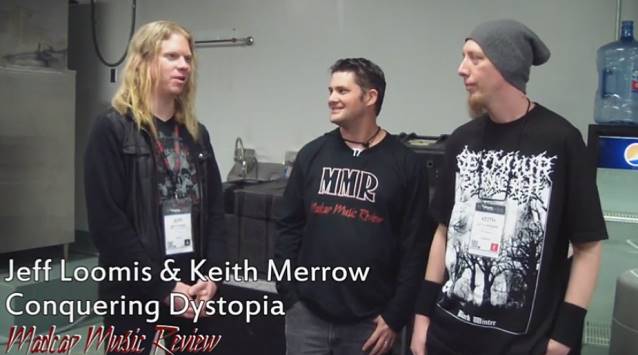 A 15-minute teaser for the self-titled debut album from CONQUERING DYSTOPIA, the new project featuring Loomis and Merrow, can be found below. The CD was mixed at Audiohammer Studios in Sanford, Florida with Mark Lewis (ARSIS, THE BLACK DAHLIA MURDER, WHITECHAPEL, DEVILDRIVER, DEICIDE, SIX FEET UNDER).

The recording lineup for "Conquering Dystopia" is completed by Alex Webster (CANNIBAL CORPSE) on bass and Alex Rudinger (THE FACELESS) on drums.

Says CONQUERING DYSTOPIA: "We feel that we have a very cool and unique band lineup, which will make for a memorable album for the listener."