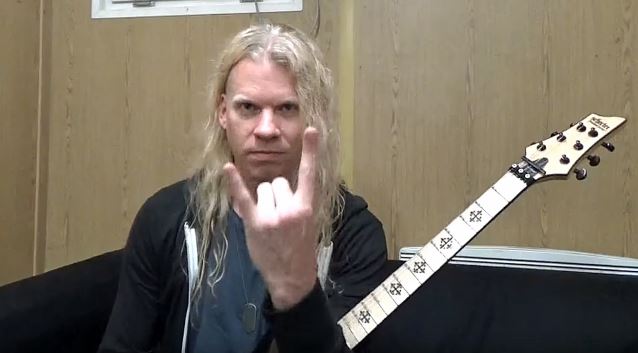 Impact metal channel conducted an interview with former NEVERMORE and current ARCH ENEMY guitarist Jeff Loomis on August 17 in Budapest, Hungary. You can now watch the chat below. A couple of excerpts follow (transcribed by BLABBERMOUTH.NET).

On how it feels to be a member of ARCH ENEMY:

Jeff: "I feel really welcome. I joined in November of 2014, and Michael [Amott, ARCH ENEMY guitarist] was initially the one to give me a call and ask me if I was interested in picking up a six-string guitar again. Michael and I go way back; I've known him for a very long time. I've known him, Sharlee [D'Angelo, bass] and Daniel [Erlandsson, drums], because, as you know, we used to do some tours together back then with my previous band [NEVERMORE]. So I've stayed in touch with Michael over the years, and it was kind of a no-brainer for me to say 'yes' to this whole thing, because I'm a really big fan of the band and I love the music, so for me personally, it was an easy decision. I missed touring again as well, and I wanted to get back out on the road and play, and this is the perfect opportunity for me to do that."

On picking up the six-string guitar again:

Jeff: "It's kind of like… You can think of it as riding a bike — you never really forget how to ride a bike, so picking up a six-string was an easy thing for me to do. I think what took me getting used to was the tuning that they use, which is a lower tuning, but I got used to it quickly."

On eight- and nine-string guitars:

Jeff: "I don't really think about it too much. I think seven is enough for me, where you can get enough low end and heaviness out of that. I have nothing against eight- and nine-string guitars; it's just something I really wouldn't move forth with. I have an eight-string at home, but I rarely play it."

ARCH ENEMY was rejoined by the band's original members Johan Liiva (vocals) and Christopher Amott (guitar) for their appearance at last year's edition of the Loud Park festival in October at Saitama Super Arena, Saitama, Japan.