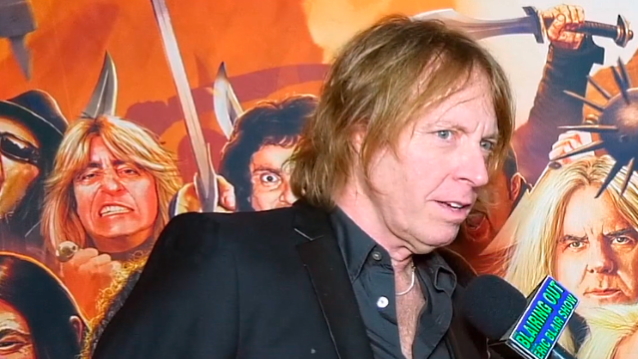 JEFF PILSON On Working With RONNIE JAMES DIO: 'Musically, It Was One Of The Most Organic And Smooth Relationships I've Ever Had'

Prior to the Ronnie James Dio Stand Up And Shout Cancer Fund's 10th Memorial Awards Gala, which took place at The Avalon in Hollywood, California on February 20, bassist Jeff Pilson (FOREIGNER, DOKKEN) spoke with Eric Blair of "The Blairing Out With Eric Blair Show" about how he came to join the DIO band in the early 1990s.

Said Pilson: "It's funny — I was at home. This would have been probably [the] spring of '93, I'm guessing. I hear a knock on the door, and it's Ronnie [James Dio] and Vinny [Appice]. We were very good friends, so it wasn't that unusual for them to come by... They said, 'Do you know of any bass players? Jimmy [Bain] hasn't shown up for, like, a week. Do you know anybody that can play? ' I said, 'Yeah — me.' He goes, 'Can you come play right now?' I said, 'There's one problem — my sprinklers are broken.' They said, 'Hold on.' Vinny is extremely handy. Ronnie was pretty handy as well. The two of them took about 15 minutes and fixed my sprinklers so we could go play. That was the beginning of the 'Strange Highways' album cycle. We had an amazing time... It was a magical, magical time... We all got along really well as friends, and musically, the chemistry was undeniable."

Pilson went on to describe his relationship with Dio as "kind of a brotherly friendship kind of thing. We bonded on so many levels. We're both big readers, and we would read a book and lend it to the other guy. I remember many a plane ride just picking each other's brains. We really bonded as friends, and musically, it was one of the most organic and smooth relationships I've ever had. He's a phenomenal musician and very respectful, but yet very decisive. It was a great combination. He was an amazing band leader. I don't know if people realize how in tune he was with everything that went on. He knew the lights; he knew everything about the P.A. Every aspect of the show — he knew about the trucks. All the crew loved him. He was so amazing as a band leader, and [as the] leader of a touring unit, he was incredible... He always wanted to do his best. Excellence was his middle name, and he just never failed in delivering that. It's infectious — it makes everybody want to be that way, and I loved that about working with him and being in the band. It just felt like you were in this thrilling unit, and that's a great feeling."