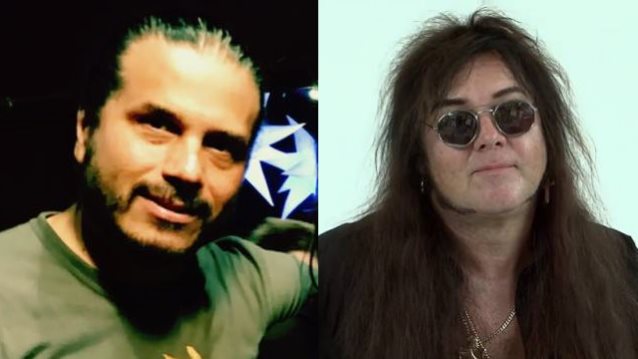 Jeff Scott Soto has fired back at Yngwie Malmsteen, saying that he finds it "comical and sad" that the Swedish guitarist would speak disparagingly about some of the singers that have worked with him in the past.

Soto's comments came in response to a recent interviewMalmsteen gave to Metal Wani in which the iconic axeman said that he had no interest in collaborating with vocalists like Soto, Joe Lynn Turner and Tim "Ripper" Owens ever again. "I'm very comfortable singing myself, first of all," Yngwie said. "Secondly, there's a certain disconnect when you write the song and you have someone else sing it for you. And it's kind of like a fakeness about it. I always wrote everything — I wrote all the lyrics, I wrote all the melodies, everything; it's just somebody else sung it. And to me, the singer is nothing else than a different… like a bass player or a keyboard player — they're not more important than any other musician. And they, unfortunately, seem to think that they are. And I've kind of had it with their sort of… self-absorbed sort of way, and I'm very much against it. No. I don't like that. I don't like any of those people, and I don't like to do anything with them ever again."

After portions of Yngwie's interview with Metal Wani were published on BLABBERMOUTH.NET on Wednesday (July 26),Soto took to his Facebook page to respond. He wrote: "This is a fabulous statement, oh my! Can't say I blame him; his vocal prowess has increased .05-fold the past two decades! Why would he want to work with horrible hacks like myself, Ripper or Joe... and deal with our egos... like wanting to hear ourselves onstage within the cavalcade of Marshalls, or getting our measly salaries on time (or at all)... or maybe it was the desire to be 'buds' that got in the way?

"Carry on there, Sing-vay, you got this!"

He continued: "On a side note, I wrote more than 3/4 of the lyrics and 1/2 melodies for 'I'll See The Light Tonight', all of the lyrics for 'Caught In The Middle' and 'Don't Let It End' (he wrote the title and got 50% of authorship) and all off 'On The Run Again' (title included). So much for writing EVERYTHING, but you must admit, a Puerto Rican 'faking' the praises about a Viking was pretty convincing, no?"

Jeff added in the comments section below his post that he wasn't "hurt at all" by Yngwie's statements. He explained: "I find it comical and sad... Hurt and angry means I would have spent the past three decades speaking negatively about my tenure with him... In essence, it was my humble beginning of what for me has been a helluva career."

He went on to say: "I'll continue to speak the truth of how positive and important it was to start where I did. It was a definitive factor on how NOT to be if I was so lucky to do this for a living!"

After yesterday's BLABBERMOUTH.NET article was published, Owens also took to Facebook to respond to Yngwie's claim that he wouldn't work with any of the above-mentioned singers ever again. Owens wrote: "Pretty sure it's because we all quit. Hahaha. Blah blah blah!" Tim then added: "Let [Yngwie] enjoy the singing!"