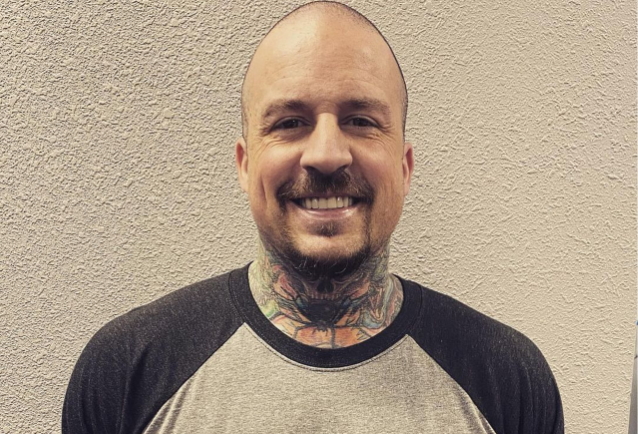 Jeremy Spencer has opened up about his collaboration with another ex-FIVE FINGER DEATH PUNCH member, guitarist Jason Hook, on the new EP from Spencer's theatrical rock band PSYCHOSEXUAL.

Last month, PSYCHOSEXUALsurprise-released a covers EP, "Songs To Stalk You By", featuring a guest appearance by Hook on two songs: the KISS classic "Watchin' You" and QUEENSRŸCHE's "Gonna Get Close To You". The recordings mark the first time Spencer and Hook have worked together since they parted ways with FIVE FINGER DEATH PUNCH.

Regarding how Hook's appearance on the record came about, Spencer told Jeff Gaudiosi of MisplacedStraws.com: "We're neighbors for starters, so we talk pretty much every day, and we've been friends for 25 years. So, I was, like, 'Dude, I'm covering KISS. Would you play a solo?' He's, like, 'Of course.' KISS is his favorite band, so it wasn't hard to persuade him to be a friend and play a cool solo on it. And he always likes that QUEENSRŸCHE song too, so I'm, like, 'Hey, man, you're here. Would you just do this too?' I got two for one that day, which is pretty nice."

Spencer also commented on FIVE FINGER DEATH PUNCH singer Ivan Moody's reaction to the news of Jeremy and Jason's latest collaboration. Last weekend, Ivanshared a video message on his Instagram in which "congratulated" Spencer and Hook for reuniting on the PSYCHOSEXUAL EP while also "accepting" a non-existent "challenge" from his onetime bandmates to make a great new album.

"Well, I've known Ivan for years," Jeremy said. "I know how his personality is and how he works. And I think he misinterpreted this whole thing. It's not [that] Jason and I are doing a project together; it was never that. It was, like, 'Hey, Jason, would you throw a solo down on my band's EP?' And he was, like, 'Sure. Of course.' I mean, we're best friends for 25 years. So Ivan's reaction, I'm not surprised, but it is a little surprising, because it's, like, "Wow, you're surprised that I invited my friend of 25 years to play a solo on my band's EP?' It had nothing to do against DEATH PUNCH or trying to challenge anyone. They weren't even on my mind. I'm just trying to do what I'm doing and just enjoy myself and do my thing. So his reaction is a very Ivan reaction. That's all I'll say. Best of luck to him."

Asked if he thinks he will collaborate more with Jason in the future, either by guesting on each other's projects or in a new band, Jeremy said: "I really don't know. I'm so focused on PSYCHOSEXUAL. If he wants me to contribute some drums to something he's doing and I'm available, of course I'll do it. I love jamming with Jason and doing music; we've done it for years. But as far as doing a project together, there are zero plans of that. And I'm not even sure what he's doing next. But I'm sure it's gonna be awesome. I can't wait to hear it, whatever it is."

Hook exited FIVE FINGER DEATH PUNCH in February 2020 during the band's sold-out European arena tour. He later said that it was "time to pass the baton and move on to new challenges."