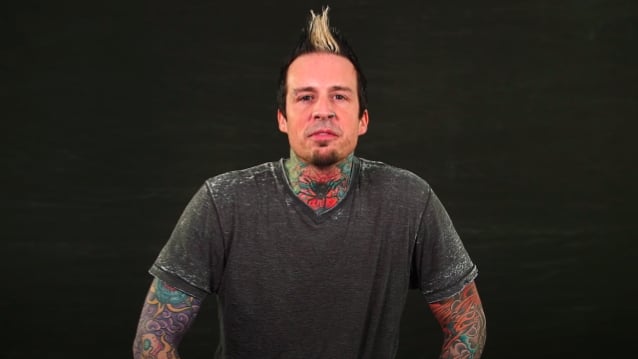 Ex-FIVE FINGER DEATH PUNCH drummer Jeremy Spencer is selling a drum kit he used on tour with his former band.

Spencer posted a photo of the Rad Rod Drums kit on his Instagram, writing in a caption: "Anyone wanna buy this monster? I have no where to store the damn thing lol. 25K plus shipping. U get everything except the riser. Sold as is. I toured it everywhere. DM me. Serious inquiries only. #ratroddrums"

More pictures of the drums can be found at Drummer Visions Magazine.

Asked in a recent interview with Music Mayhem Magazine for an update on his condition, Jeremy said: "I had degenerative discs in my back from years of physical drumming forcing me to get disc replacement surgery and fusion. That surgery was a setback and really took a toll on me mentally as well as physically. I'm so much better now. A year has gone by and I'm back to working out with a trainer and can actually be mobile again, which is something we all take for granted."

Spencer is currently the frontman of a new rock band called PSYCHOSEXUAL, which will release its debut album, "Torch The Faith", on July 31 via Jeremy's independent imprint 6ex Records.

Anyone wanna buy this monster? I have no where to store the damn thing lol. 25K plus shipping. U get everything except the riser. Sold as is. I toured it everywhere. DM me. Serious inquiries only. #ratroddrums