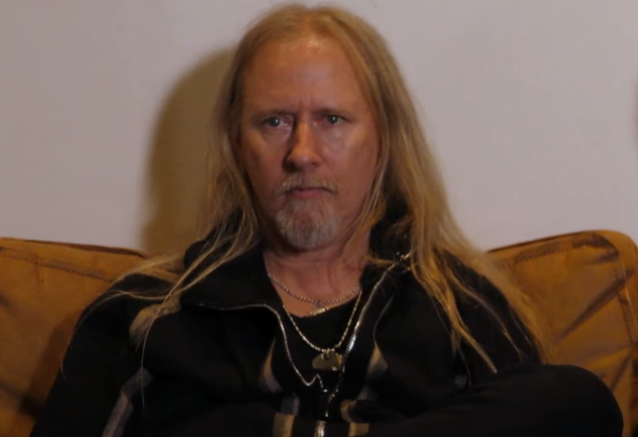 JERRY CANTRELL On ALICE IN CHAINS: 'We're Still Creating At A Top Level'

On July 6, FaceCulture conducted an interview with ALICE IN CHAINS guitarist, singer and songwriter Jerry Cantrell and composer-musician Tyler Bates, who is also in Jerry's touring band, in Amsterdam, Netherlands. You can now watch the chat below.

Speaking about ALICE IN CHAINS' musical impact over the course of the band's three-and-a-half-decade career, Jerry said: "I'm still on a journey. That's where it started, and it's still in motion. I try not to spend a whole lot of time looking back; I just kind of try to spend time concentrating on where I am at the moment. Now, of course, I'm always connected to that. And there's more stuff to do. I'm gonna go on tour with ALICE from August to October. Four days after we get done with [my European solo tour], I'm in rehearsals for ALICE.

"I guess the thing that means the most is I took that trip with my brothers and we all banded together and we found each other somehow and we were supposed to find each other and we have a sound that is unlike anybody else," he continued. "And that's the whole point — trying to create some sort of a sound that's uniquely yours. And I was able to find that with my family there, with Layne [Staley, vocals] and Mike [Starr, bass] and Sean [Kinney, drums]. And throughout the years of changes and things that life throws at you, we've continued on and continued to navigate all of those changes and continued to grow — up to the last record [2018's 'Rainier Fog']. I think that record's kickass. [Laughs] I think we're still creating at a top level. [Mike] Inez [bass] and William [DuVall, vocals] coming into the band, it's all good.

"I guess the main thing, probably, is that it still means something to people. We play some of those songs in [my solo] set as well, and it's always exciting and trippy, man, to see people react when you start playing those songs. They're not just yours anymore; they're everybody's. And I don't mean that in just some generic way. They have just as much ownership in it as I do. So it's pretty cool to share those moments."

"Brighten" is Jerry's first project without ALICE IN CHAINS in 19 years. Co-produced with Bates and Paul Fig (longtime engineer),the LP got its beginnings just before the pandemic hit. They welcomed a dynamic cast of supporting players, including Duff McKagan (GUNS N' ROSES) on select bass tracks, Puciato contributing to backing vocals and drummers Sharone and Abe Laboriel, Jr. (Paul McCartney). Joe Barresi (TOOL, QUEENS OF THE STONE AGE) handled the mixing of "Brighten".

ALICE IN CHAINS regrouped in 2006 with DuVall joining the band, and released its third LP with DuVall in the lineup, "Rainier Fog", in August 2018.