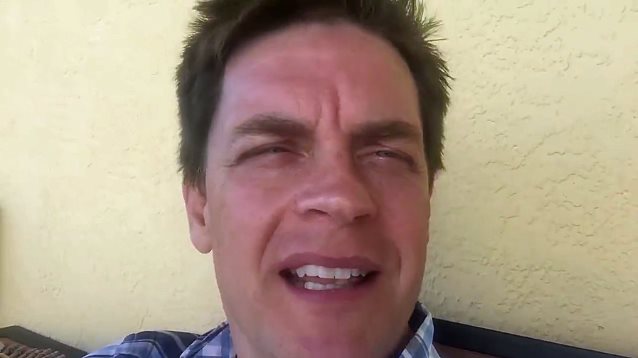 AC/DC frontman Brian Johnson's close friend, comedian Jim Breuer, has released a video message clarifying the comments he made in which he suggested the singer was "kicked to the curb" by the band after 36 years.

Breuer said (see clip below): "Just so people know, I'm not quoting Brian Johnson. It's me venting. He didn't say a lot of those things. When I first saw him he was just down and sad and just saying, 'I'm just trying to work things out and I hope it all comes to fruition.' The rest is me just trying to lift him up, being funny and goofy. Then I just talked in a conversation with a friend kind of exaggerating some of those points. I had no clue the madness that it would create."

AC/DC recently postponed the last ten shows on its latest North American trek after it was reported that Johnson's doctors advised him to come off the road or face "total hearing loss." But Breuer said there was more to the story.

On his "The Metal In Me" podcast, Breuer said he saw Johnson in Sarasota, Florida on March 11, where the singer told him that his doctor had confirmed some hearing loss during the first, mostly outdoor, leg of AC/DC's world tour. According to Breuer, Johnson said, "[The doctor said], 'Now you're gonna go out and do indoor [shows]? I do not put my name on this. You're a grown man. You make a decision, but I would not mess around with this at all.'"

Johnson then went to guitarist Angus Young and AC/DC management to explain the situation, according to Breuer, who said: "[Brian] said that he called and let [AC/DC and Young] know, 'Hey, this is what the doctor said, but let's try to figure this out. I don't think it's as bad as he said it is.' Literally the next day in the press, it was 'Brian Johnson, tour canceled, he's losing his hearing.'"

Shockingly, Breuer added that Johnson suspects that he has already been replaced in AC/DC. Breuer said: "He feels like he heard from someone that they already hired somebody, it just hasn't been announced yet."

Johnson has been the band's singer since 1980, when he replaced the late Bon Scott. He made his recording debut with the group on the classic "Back In Black".

AC/DC has been on the road since last year in support of its 16th studio album, "Rock Or Bust". The band has said it will make up the postponed dates, possibly with a "guest vocalist."