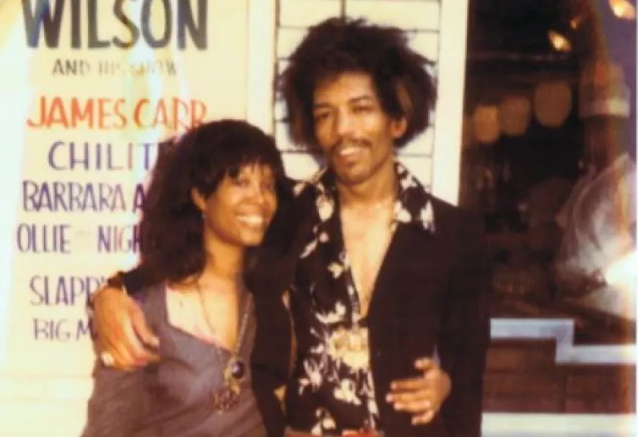 Lithofayne Pridgon, Jimi Hendrix's long-term girlfriend and the presumed inspiration for his classic song "Foxey Lady", died at her home in Las Vegas on April 22 at age 80. Her death wasn't publicly announced until this week.

Upon meeting each other in Harlem in 1964, Faye and Hendrix enjoyed an immediate connection with the two sharing a love for each other and music. They lived together, wrote songs and spent hours together listening to favorites from her mother's deep collection of blues 45s and 78s. Pridgon was struck by Hendrix's knowledge and understanding of these artists and their music. Their relationship helped inspire "Foxey Lady".

"Faye was an extraordinary lady," explains Experience Hendrix catalog manager John McDermott. "We began a friendship more than 30 years ago which continued right up to her recent passing. Her contributions to the books I have authored about Jimi Hendrix were invaluable. Her perspective was always illuminating and her demand for accuracy never waned. Her contribution to the 'Hear My Train A Comin'' documentary was immensely important, providing first-hand accounts of Jimi Hendrix history from a vantage point that no one else had. We fans owe her a debt of gratitude for sharing this information."

"We shared a deep love for blues music," continues McDermott. "Our conversations would always spark her to ask if I was aware how much Jimi liked obscure 45's such as 'It's Too Late' by TARHEEL SLIM & LITTLE ANN, 'Suffering Mind' by Guitar Slim or the passages within Elmore James's 'Anna Lee' that Jimi would play his guitar to over and over (he wore out three copies said Faye). She will be greatly missed."

Janie Hendrix, president and CEO of Experience Hendrix, recalls: "When I met Faye, it was no mystery why she and Jimi had such a close bond. They were kindred spirits, possessing the same genuineness and zest for life. Faye had a beautiful spirit and it was like finding a long-lost sister. She had such colorful stories to tell, which I loved hearing and will treasure. Over the years, we developed a closeness built on joy, laughter, encouragement and a shared love for Jimi. She will be missed, but her light will never go out!"