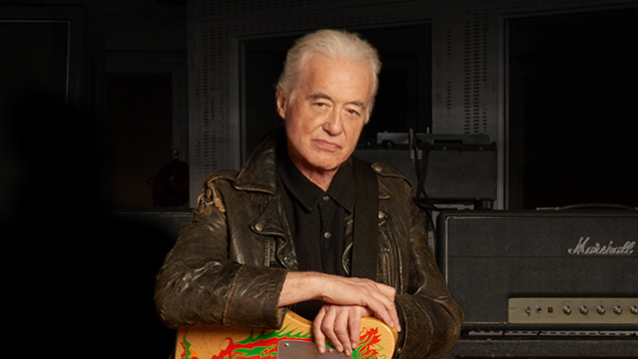 JIMMY PAGE 'Reconnected Properly With The Guitar' During Coronavirus Lockdown

Legendary LED ZEPPELIN guitarist Jimmy Page has told Classic Rock magazine in a new interview that he is not ready to hang up his instrument just yet. "I'm never not doing something," he said, "and I'm never not doing something that's going to surprise people. It's like when I did a spoken word project with my girlfriend [2019's 'Catalyst', with poet Scarlett Sabet]. Nobody was expecting me to do that, because nobody had done that before. It was really wonderful to do. But I've always got ideas, and the day that I wake up and haven't got any ideas of what to do and how to do it, that for me will be a very sad day. And that day looks like it's some way off yet.

"One of the things I was complaining about before we all had to lock down was that I wasn't having enough time to play guitar," he continued. "I was able to actually say, 'Well, this is it. You can do it every day now.' So, it's given me an opportunity to reconnect properly with the guitar."

Last year, Page said that he was planning to tell his life story in the form of a book. Speaking to Uncut magazine, he said: "I will definitely do an autobiography. Every six months brings new things for me to write about or comment about. I have a number of ways I plan to approach it. But I am determined that I'll write it first and then go to a publisher, because I don't want to be held to a deadline."

ZEPPELIN last performed in December 2007 in London, with drummer Jason Bonham filling in for his late father John Bonham.