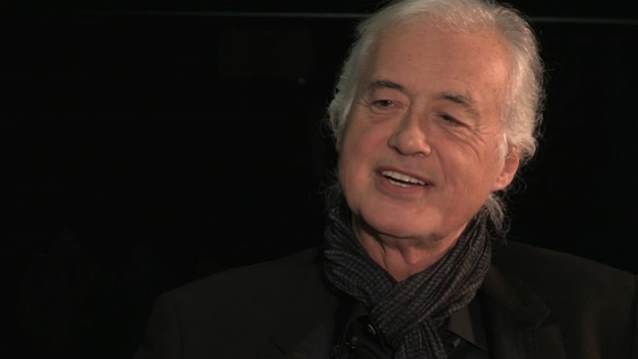 In a brand new interview with The New York Times, Jimmy Page was asked if he he feels a need to play live after being ensconced in the studio for three years working on the upcoming expanded reissues of the entire LED ZEPPELIN catalog of nine studio albums. "Absolutely, absolutely," the guitarist replied. "I definitely want to play live. Because, you know, I've still got a twinkle in my eye. I can still play. So, yeah, I'll just get myself into musical shape, just concentrating on the guitar."

Regarding whether there is a chance of LED ZEPPELIN playing any more concerts nearly seven years after the band's lone reunion show at London's O2 Arena, Page said: "I was told last year that [singer] Robert Plant said he is doing nothing in 2014, and what do the other two guys think? Well, he knows what the other guys think. Everyone would love to play more concerts for the band. He's just playing games, and I'm fed up with it, to be honest with you. I don't sing, so I can't do much about it. It just looks so unlikely, doesn't it?"

Speaking to Rolling Stone magazine about the deluxe reissues of ZEPPELIN's first three albums coming on June 3, Plant — who has performed as part of LED ZEPPELIN at three massive concerts over the years, as well as a few one-off semi private gatherings, not to mention recording two albums and touring the world with Jimmy Page — snapped when the chat — as expected — turned to LED ZEPPELIN reuniting once again. "You're going back to the same old shit," he said. "A tour would have been an absolute menagerie of vested interests and the very essence of everything that's shitty about about big-time stadium rock. We were surrounded by a circus of people that would have had our souls on the fire. I'm not part of a jukebox!"

When reminded how many of his peers are enjoying massive tours celebrating their creative past, Plant said, "Good luck to them. I hope they're having a real riveting and wonderful late middle age. Somehow I don't think they are."

Plant went on to say that he was all for Page, John Paul Jones and Jason Bonham, carrying on without him after the 2007 reunion gig. "They kept rehearsing after O2 and they had a singer," he said. "I don't know what happened. It seemed like a great idea to me."

He went on to say, "I don’t think there's any reason for me to do that. Otherwise we've got nothing to be mystic about. . . Everything will develop as it develops. All doors are open. All phone lines are open. I don't hear from anybody. Talk is cheap. . . But I just think everything has to be new. Then you can incorporate history."

When pressed about the possibility of if not live performance, then some new LED ZEPPELIN music — which is what he actually intimated, a peeved Plant said: "You can't be the marriage guidance clinic here."

He ended the interview by saying: "Do you know why THE EAGLES said they'd reunite when 'hell freezes over,' but they did it anyway and keep touring? It's not because they were paid a fortune. It's not about the money. It's because they're bored. I'm not bored."

According to The Pulse Of Radio, Page spoke frankly about the post-O2 reunion ZEPPELIN rehearsals, which featured jam sessions with Steven Tyler and Myles Kennedy, saying, "Singers were being thrown at us from here and there. The material we were coming up with was really, really good. Obviously, other people wanted to just get us out on the road quickly. I wasn't feeling comfortable. Going out with the three members from the O2 show and another singer might have looked like trying to jam a square peg into a round hole. I wanted to see what we could come up with musically."

The option for a three-quarter ZEPPELIN reunion ended when Jones accepted an offer to form THEM CROOKED VULTURES with Dave Grohl and Josh Homme. Page said: "I guess that was a pretty definitive statement."

Page said "the LED ZEPPELIN question" is never far from people's lips, joking, "People ask me nearly every day about a possible reunion. The answer is 'no.' It's been almost seven years since the O2. There's always a possibility that they can exhume me and put me onstage in a coffin and play a tape."

During the 2012 "Celebration Day" press conference in Manhattan, tensions started to rise when Plant refused to address the reporters' simple questions regarding future LED ZEPPELIN performances. After some coaxing by the event's moderator, Plant finally answered the reunion question with a bit of respect for the reporters in the room. "We were so happy that we were actually gettin' it right [coughs] and taking it beyond what we thought we were about that night," he said. "There were moments in it where we just took off and pushed off in some place. The responsibility of doing that four nights a week for the rest of time is a different thing. 'Cause we're pretty good at what we do; the tail should never wag the dog. If we're capable of doing something in our own time that will be what will happen. So any inane questions who are from syndicated outlets [laughter], you should just really think what it takes to answer a question like that in one second, y'know? We know what we've got."