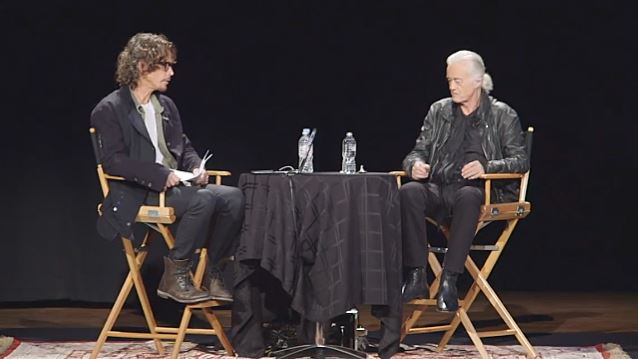 Jimmy Page publicized the release of his official photographic autobiography, "Jimmy Page By Jimmy Page", by taking part in a question-and-answer session with Chris Cornell at Los Angeles's Ace Hotel on November 12, 2014. The press release for the event stated: "During the course of a dialogue together, the audience [was] invited to join Jimmy and Chris looking through unseen photos and memorabilia, many drawn from Jimmy's personal archives. Jimmy Page [revisited] memories of his life in music — from 13-year-old choirboy to the '60s session musician, through THE YARDBIRDS to LED ZEPPELIN and beyond."

In Episode 3 of this fascinating interview, Page discusses the formation and rise to success of LED ZEPPELIN.

Page added: "I always like to do something different — if you’re inspired by an idea, really make something of that inspiration. That goes for music, as well as anything else -- even putting a book together! To have a photographic autobiography is a totally different way of looking at things, but it does the job very well and I think it will bring a lot of pleasure to people."

Page is prepping to hit the road in 2015, telling England's The Week that he still hasn’t secured the band to take on tour. "I know people want to hear me play," he said. "I want to hear me play, too… I'm really starting to get myself enthused and limbered up for putting something together… That, for me, is exactly how things should be. I want to surprise people. I'll play everything, and some new music I've got."

Page told The Pulse Of Radio that he knew from the beginning that the magic surrounding LED ZEPPELIN wouldn't last forever. "I said, basically around the time of the first album, it's all a race against time, and I think it is. It still is. It still is a race against time and trying to do good work and improve on what you've done. It's more difficult as you get older because you know your days are numbered, really. Within ZEPPELIN, we had this amazing vehicle that we could continue and continue and just come up with amazing things — which fortunately we did continue, and we did come up with amazing stuff. But I still thought it was a race against time. I had no idea how prophetic it would be with the loss of John Bonham."