JOAN JETT & THE BLACKHEARTS To Open For MÖTLEY CRÜE, DEF LEPPARD And POISON On 2020 Tour

JOAN JETT & THE BLACKHEARTS will serve as the opening act for MÖTLEY CRÜE, DEF LEPPARD and POISON on their upcoming North American stadium tour.

According to 97 Rock Online, Jett will perform with the three hard rock acts at T-Mobile Park in Seattle, Washington on September 2, 2020. Tickets will go on sale this Friday, December 13 at 10:00 a.m.

DEF LEPPARD and MÖTLEY CRÜE are co-headlining the tour, with DEF LEPPARD closing the show at T-Mobile. "It is up to the bands' discretion as to who closes in what city," a post on the 97 Rock Online web site reads. "DEF LEPPARD is tabbed to close the Seattle gig."

MÖTLEY CRÜE, DEF LEPPARD, POISON and JOAN JETT & THE BLACKHEARTS will also reportedly perform on June 13, 2020 at MetLife Stadium in East Rutherford, New Jersey, with another date reportedly set for the SoFi Stadium in Inglewood, California.

The full routing for the tour will be announced today.

Two weeks ago, MÖTLEY CRÜE announced that it was coming out of retirement, nearly four years after playing what was billed as the band's final concert at the Staples Center in Los Angeles.

CRÜE fans who shelled out for the band's 2014/2015 "farewell" tour were led to believe that the group would never return after completing the trek. The band touted the signing of a pre-tour "cessation of touring" agreement as cementing the fact it truly was the end of CRÜE's life on the road. 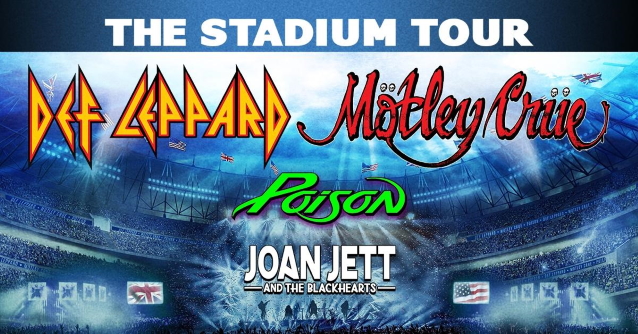