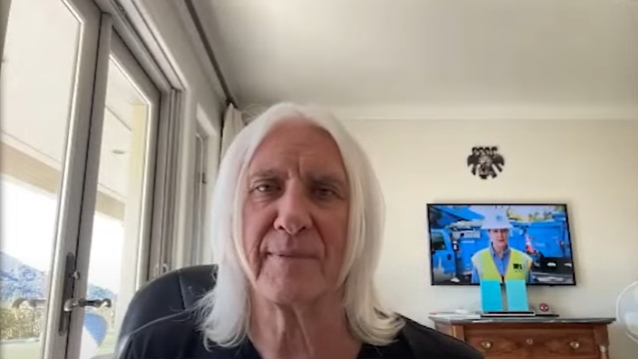 JOE ELLIOTT On Why DEF LEPPARD Continues To Make New Music: 'We Just Never Lost That Hunger To Write'

In a new interview with Colombia's Radioacktiva, DEF LEPPARD singer Joe Elliott was asked what keeps him and his bandmates motivated to write and record new music. He said in part (as transcribed by BLABBERMOUTH.NET): "Because it's what we do. When we got together, yes, playing in front of an audience was priority — that's what every band wants to do, 'cause we're all showoffs; I mean, c'mon, let's be honest. But you can't get up on stage unless you write some songs. Nobody's gonna be a cover band forever, so you wanna write songs. So it's in your DNA, because the bands that you grew up wanting to kind of mimic — THE WHO, THE [ROLLING] STONES, THE KINKS, THE BEATLES — and then, as you get a little older, like you're 10, 12 years old, you start listening to David Bowie, T.REX, QUEEN, MOTT THE HOOPLE, SLADE and then the punk scene — THE [SEX] PISTOLS, THE CLASH — you see these bands, they're writing all their own songs. It's what you do. Now, it's only recently that there's been bands that are 30, 35, 40 years old. There were no 40-year-old bands when we started out. [LED] ZEPPELIN was still together; they'd only been together maybe eight, nine years when we formed. THE STONES and THE WHO were probably 15 years old. It's crazy to think. So there were no legacy artists. So it's in your mindset from being a teenager that if you're in a band, you're expected to write. And as we got older, we just never lost that hunger to write; we've always done it."

He added: "The day that I don't have any new songs, I'll dry up, as we all will, but we just keep pushing each other… My head is always churning up new ideas, and that's one of the reasons that we keep writing, is because we can't stop. We like to challenge our history. 'Pour Some Sugar On Me' and 'Photograph' and 'Rock Of Ages' and 'When Love And Hate Collide' and 'Let's Get Rocked', they may well be our most well-known songs, but we have to think, as artists, that they're not necessarily the best songs we'll ever write. We have to challenge ourselves to think we could write a better song. It may not be as popular, and it will always fight the history — a song that's 30, 40 years old — but we haven't necessarily written our best song yet. So that's what we keep challenging ourselves to do."

DEF LEPPARD's "The Stadium Tour" with with MÖTLEY CRÜE was originally scheduled to take place in the summer of 2020 but ended up being pushed back to 2021, and then to 2022, due to the coronavirus pandemic.

DEF LEPPARD will team up with MÖTLEY CRÜE for the co-headline "The World Tour" in early 2023. Produced by Live Nation, the trek will kick off on Saturday, February 18, 2023 at Foro Sol in Mexico City. Both bands will bring their electrifying stage shows across the globe with stops throughout Latin America before heading to Europe in May 2023 — which includes a stop at the iconic Wembley Stadium on Saturday, July 1, 2023 — then wrapping up in Glasgow, U.K. at Hampden Park on July 6, 2023.