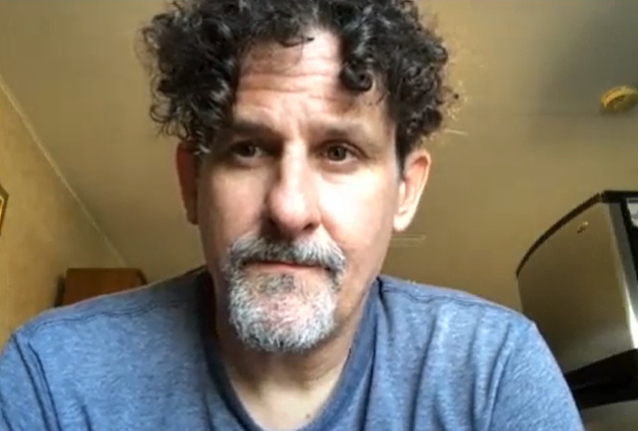 In a new interview with "That Metal Interview" podcast, drummer Paul Mazurkiewicz of long-running Florida death metallers CANNIBAL CORPSE was asked what keeps him and his bandmates inspired to continue touring and recording nearly 35 years after the group's inception. He responded (as transcribed by BLABBERMOUTH.NET): "We've been doing it for that long. That's a big inspiration. You're living your dream. Here we are — when we started out, we were basically teenagers, and then you're just wanting to play music. You have a dream, like everybody else: 'Wouldn't it be great to be in a band [and have] our band make it and be able to tour?' You never thought that it would end up being to this level [and] this long. So I think we feel very lucky, in a lot of ways, to be doing this as long as we have. So I think as long as we feel healthy — and we are — and we still have the attitude and wanna play music and create, then that's gonna give us incentive to keep moving forward. I mean, all those clichés — you only live once; all those kinds of things that you can say that make sense. Why not just take it as long as we can, because, like I said, it's been a dream come true for us. And life's too short, you only live once — all those, like I said, clichés that… You know, why not? I think that gives us a lot of inspiration."

Last December, Mazurkiewicz told Laughingmonkeymusic about how long he thinks CANNIBAL CORPSE can keep going: "As long as we're all healthy, then who knows how long we can take it. I wouldn't have ever thought when I started that I'd still be doing this still at [54] years old. So, how long can we take? You've just gotta look at it, at this point, day by day. You never know. If you stay healthy and you keep active and you keep doing it, it's just gonna come down to that — it's gonna come down to the health factor. Because everybody knows — the older you get, anything can go wrong at any given time, whether it's a disease or an injury or whatever that you just go, 'I can't do it anymore. No matter how much I practice and how much I do the right thing, it doesn't matter.' So we've gotta just take it day by day at this point. There's no denying — we're more at the end of our career than we are in the beginning. Can we go another 30 years? Well, I highly doubt it. I would be [84] doing this… That would be incredible [if we could still do it at that age], but I would have to almost think that would slightly be impossible. I guess it's possible — who knows? We don't know. Nobody's done it in that sense in the extreme form.

"When you had [THE ROLLING STONES drummer] Charlie Watts still doing it at 80 years old, that's amazing," he continued. "So the fact that [he was] still drumming and [he was] on stage at 80 is incredible. I just met Carmine Appice the other day, and he's 75. And the guy is still up there and playing and doing his thing — albeit it's not maybe extreme death metal, but still, he's up there playing drums…