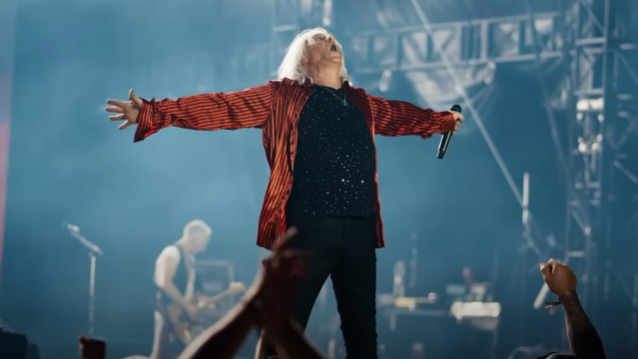 In a new interview with Goldmine magazine, Joe Elliott said that streaming music services like Spotify and Apple Music have helped establish DEF LEPPARD as "a cool legacy band." He explained: "You've gotta remember: We were one of the longest holdouts [from the digital music revolution]. We didn't announce our digital deal until me and Neal Schon were doing the promo for the JOURNEY stadium tour in 2018, in January. And then because in the past I would have to ring our management and say, 'How many copies has blah, blah, blah sold?' 'Oh, I'll get back to you in two weeks' and then have to call somebody, and they'd have to go flicking through a filing cabinet, looking for a sheet of paper. Now you get, 'Do you wanna know how many times you were streamed this morning in Venezuela?' We've got this instant information. And I was told the other day that we're almost six billion streams since January '18. I'm, like, 'Wow, this is insane!' You know, that's not Taylor Swift or Adele territory, but for us, that's pretty incredible, you know? And these things, again, they inspire you to just walk a little bit taller. And, also, you now realize that you're streaming so massively in South America, that you pretty much got the tour booked around where you stream. This was the information that was always guesswork in the past. Now it's the information highway."

Joe continued: "And between streaming and social media, which you can pretty much tie together, hand in hand, we have this unique situation of having this perpetual vehicle. You don't wait now until Thursday lunchtime for the music mags to come out, which is what we used to do in the U.K. We had Record Mirror, Disc, NME, Sounds, and they'd all come out Thursday. And they'd all pretty much have the same information, but you'd have to flick through it to see who's on tour, what songs are being reviewed, and then put your order in to buy a copy of it. It's totally different, but it's just as exciting. I don't think it's as organic, but everything else, whether it's gaming or music or news, any kind of information, the fact that it's instant, it might get blasé. But at least you've only got two or three minutes to catch what you need to catch. You don't have to wait till 10 o'clock for the news at 10 to come on, find out what's going on in the world. You can sit on the loo, grab this, it's Sky News and see what's going on. [Laughs] And so from a musical point of view, it's really helping all artists, I think, but I'm glad we held out because it made it give our back catalog a big bang when we finally announced it."

In 2012, several years before coming to terms with the Universal Music Group over digital rights for some of the band's best-known material, DEF LEPPARD began re-recording its biggest hits, including 1983's "Rock Of Ages" and 1987's "Pour Some Sugar On Me", as a way to offer its fans a digital option while at the same giving a giant middle finger to the group's longtime label. According to The Hollywood Reporter, DEF LEPPARD did this because they were at one point able to negotiate a sweetheart of a deal wherein they had approval over everything that was done with their songs — from special collections to licenses for movies, TV shows and games and their very availability online.

Elliott told The Hollywood Reporter in a 2012 interview that the fight with Universal was "about principle." But, he admitted, "I'd be lying if I didn't say it was about money because the problem we've got is, they want to pay us what we think is a ridiculously low rate. It's a well-known fact: Artists throughout the years have always been shafted by record companies. … The reason we're being so sticky about it is because two years ago, we made a deal with a gentleman at Universal who was pretty much on our side — he was a fan, a smart businessman and a fair guy — and we shook hands. Fifteen days later, somebody above his head said the deal's not going through. To an Englishman, when you shake hands, it's a binding contract, and Universal reneged on it. So we dug in our heels and said, 'We're gonna say a blanket no to anything that you ask for.'"

As a result of the disagreement, Universal couldn't "release our back catalog, we're not going to let them put a song on a compilation unless we want it there, and they'll never be able to license," the singer said. "They won't be able to do anything without our permission because that's in our contract."

Elliott went on to say that the crux of the dispute centers on the fact that DEF LEPPARD wanted "to get the same rate for digital as we do when we sell CDs, and they're trying to give us a rate that doesn't even come close. They illegally put up our songs for a while, paying us the rate they chose without even negotiating with us, so we had our lawyer take them down," he explained.

"We made a decision years ago that we would try and wrestle back control," he added. "And I think that's something to be applauded. We are just trying to own what we've done. We own our T-shirt deals, our own staging, and our own rights to make whatever decisions we want. We're not trying to milk our back catalog for billions of dollars, we're just trying to get paid a fair amount."

DEF LEPPARD's "The Stadium Tour" kicked off on June 16 in Atlanta, Georgia. The veteran British rockers are co-headlining the trek with MÖTLEY CRÜE, with support from POISON and JOAN JETT & THE BLACKHEARTS.