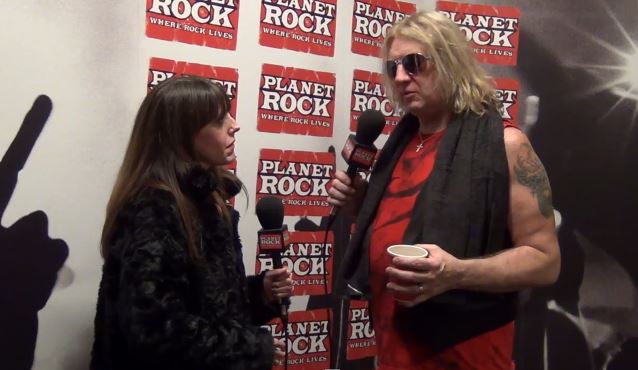 JOE ELLIOTT Talks Next DEF LEPPARD Album: 'Musically, It's Hard To Pinpoint What It Is'

On December 6, DEF LEPPARD and DOWN 'N' OUTZ lead singer Joe Elliott was interviewed by Liz Barnes of Planet Rock backstage at Planet Rockstock at Park Dean Holiday Park, Porthcawl, Wales, United Kingdom. You can now watch the chat below.

Speaking about DEF LEPPARD's plans for the immediate future, Elliott said: "DEF LEPPARD's gonna be really busy next year. We'll have a new album out in the spring, early summer. We've got European dates booked, we'll have a British tour when the album is ready to go, probably towards the end of 2015. There's Canadian shows, there'll be an American tour, there's Japan, Australia. I mean, it's a big world these days, and you've gotta go where you're needed and where you're wanted. But we'll definitely be playing the UK, for sure."

Regarding the progress of the songwriting and recording sessions for DEF LEPPARD's next studio album, Elliott said: "We've done fifteen songs so far. We went in in February to write three or four songs. This is the thing about the industry at the moment… Nobody really knows where it is and where it's going — even we don't. But, luckily, we kind of live in our own little bubble, so it doesn't matter what we think. But we went in thinking, 'Well, we'll do an EP, 'cause I don't think anybody really care about albums anymore.' But then while we were writing these four songs, we actually wrote twelve. And I was, like, 'Well, we've just written an album then.' And then all of a sudden everybody's buying albums again. And then we got back together in May, just to work on those twelve, and we came up with another three. So we've got fifteen songs cooking at the moment. It's nuts. Three or four of 'em we could actually release tomorrow. But the rest of 'em need a lot of work. As soon as I get home after this tour is finished, I'm gonna go back straight back into the studio the last week of December, so I can get a bit more work done."

On the topic of the musical direction of the new DEF LEPPARD material, Elliott said: "It's sounding good. I don't know how to explain it right. Musically, it's hard to pinpoint what it is. There's a couple of things that are obviously us, and there's a couple of things that a band our age should be doing — a little bit more adventurous, a little bit more off the beaten track, but it still has our stamp on it, if you like."

Elliott recently told Belfast Telegraph that DEF LEPPARD guitarist Vivian Campbell has returned home after undergoing stem-cell treatment in his continuing battle with Hodgkin's lymphoma. "He's just out of hospital," the singer said. "He had stem cell surgery and he's home about 48 hours. From what I gather, it all went really, really well. He has to stay away from pretty much everything, especially people, because his immune system's going to be zero right now. But we don't start work again until April, and he's done all his stuff for the album, so it's a good time for him to recuperate and get his strength back together."