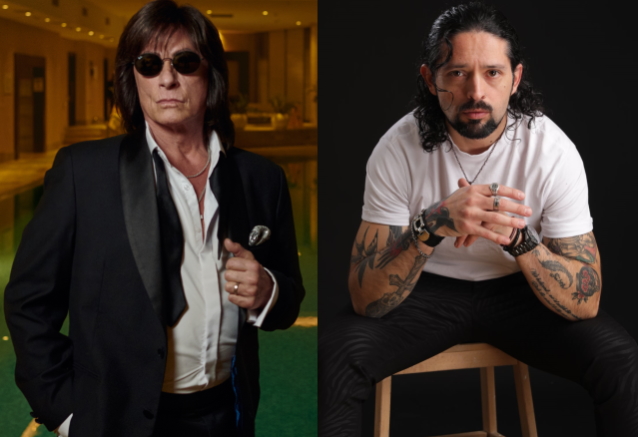 Former RAINBOW singer Joe Lynn Turner has defended his recent comments about Ritchie Blackmore's decision to go out and perform the band's classic material with a new group of musicians, saying "the RAINBOW legacy deserved much better treatment and respect than it received."

Earlier in the month, , Turner — who fronted RAINBOW from 1980 until 1984 and was a member of PURPLE from 1989 until 1992 — told the "Rock Of Nations With Dave Kinchen And Shane McEachern" podcast that he had been in talks with Blackmore for at least a year about a renewed collaboration before he found out from a French newspaper that Ritchie was returning to rock music but excluding Joe from the project.

Asked if he thinks it would be great for RAINBOW to stage a reunion of all the surviving members for a special show or festival appearances, the singer said: "Well, man, I tried to do that already. Before Blackmore did the reunion — you know, that 'reunion'; call it what you want — we were in discussions about having everybody that was in RAINBOW together for an extravaganza. I mean, anybody who was still alive, and even paying tribute to [Ronnie James] Dio and everything, and trying to get 'em all in one place at one time, do a two-and-a-half-hour show at least, an authentic RAINBOW reunion. And it just got squashed down by his management and everything else. I mean, Live Nation showed up. I had a documentary, a 3D documentary, like the GUNS N' ROSES — same guy, Barry Summers, who did that; he's a good friend of mine — and it just fell on deaf ears. And that reunion became — I don't know what it was, really, because it really wasn't a reunion of anything. There was nobody in RAINBOW before who was there. It was BLACKMORE'S NIGHT, really, with a new singer. That was it."

This past Friday (September 16),Romero took to his Instagram to share a concert photo of the most recent RAINBOW lineup, and he included the following message: "There is so much power in our words when we are a 'public person', that we must be careful with what we say…

"I don't know and I don't care what's between The Main Man and some old ex members of the band, what happened or whatever. I'm just a normal guy who one day received the call from one of His idols to sing in the band He always dreamed of to sing… that's it. I'm pretty convinced I did my job well, (same for Jens, Bob and David, wonderful musicians) as all the feedback, appreciation and love I'm still getting in every place I go.

"I know as well you cannot be liked by everybody, but I will not tolerate to somebody to call my work 'cheap'… No Sir.

"Maybe for some guy is time to move on, as He did with other issues in His life, and to be careful to not to despise honest people who is here just working hard, as He does. At the end is all about Music, that's the only thing that counts and matter".

In response to Romero's post, Turner released the following statement via his social media earlier today (Sunday, September 18): "RAINBOW was an Iconic band. All the incarnations throughout the years were unique and exceptional, with one common thread that was running through it all - the highest standards of excellence, integrity and quality that Mr. Blackmore demanded from everyone and especially Himself. I learnt the most valuable lessons that I've carried forth in my own carrier and I will always be grateful to Ritchie for that. Mr. Blackmore set the bar very high for the level of creativity and performance for the whole Industry to follow, aspire and protect. He is a true Professional and Perfectionist.

"I've put blood, sweat and tears into my tenure with RAINBOW... And my opinion of the last 'incarnation' of RAINBOW is well deserved and has never changed. With or Without my personal participation, I believe that this 'reunion' could have and should have been treated with more concern and respect to the Iconic standards that Mr. Blackmore himself had established.

"A Legacy is historically about the significant achievements and accomplishments that should be preserved and treasured. For example, the re-release/re-recording of one of the biggest RAINBOW classics 'I Surrender' was a heartbreaking disappointment... And I think the reasons are more than apparent and obvious for everyone who's heard it...

"My recent interview statement never referenced any individual in particular, that was never my intention. And anyone who feels singled out is either paranoid and insecure about their own self-worth. As most of you have noticed recently, I have totally moved on and I am in the exact place and time that I want to be.

"So, I offer an important advice to those who are personally concerned with this issue - Try moving on yourself out of the shadows of those who perpetrated the originality and creativity necessary to achieve such status.

"Simply put, I believe the RAINBOW legacy deserved much better treatment and respect than it received and so did many loyal, supportive and dedicated fans who wished to see RAINBOW shine with it's brightest colors.

"This will be the last time I address this situation, as it is old, tired and completely irrelevant, being simply a product of the 'yellow press' looking for any dirt they can dig up or shine a spotlight on themselves for personal gain..."

Two and a half years ago, Turner spoke about his failed reunion with Blackmore, telling the "80's Glam Metalcast" that he had been "talking to [Ritchie's] so-called 'management,' 'cause it's his mother-in-law, for a good year. I've got all the e-mails to prove it. We were going back and forth talking about what the reunion of RAINBOW would be. And I wanted an authentic RAINBOW reunion; I wanted to get authentic players. I wanted the realRAINBOW — not just the RAINBOW I was in — but I wanted to bring up Doogie White and Graham Bonnet and I had Bob Daisley. Unfortunately, Jimmy Bain had passed and so on and so forth, but Don Airey… I wanted to make it sort of a RAINBOW extravaganza. There would be a core band, whether it was [Bobby] Rondinelli or [Chuck] Burgi on drums or Dave Rosenthal — I spoke to all of them. I was lining all this up."

Rainbow was an Iconic band. All the Incarnations throughout the years were unique and exceptional, with one common...