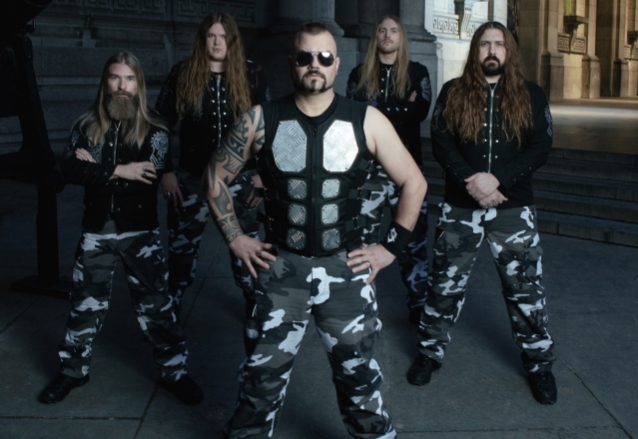 Will SABATON 'Take Over' After IRON MAIDEN And JUDAS PRIEST Have Retired? PÄR SUNDSTRÖM Weighs In

In a new interview with Robert Cavuoto of Metal Rules, SABATON bassist Pär Sundström was asked about his band's "plans for world domination" once legendary heavy metal acts like IRON MAIDEN and JUDAS PRIEST have officially retired. He said (as transcribed by BLABBERMOUTH.NET): "Well, we will see. First of all, I don't wanna see them retire, even if eventually all things will have to do that, including us as well someday — a hopefully a long time in the future.

"We don't focus so much on what others are doing," he explained. "We focus on what SABATON is doing, and we are doing pretty well at the moment — we are growing and growing and growing, playing for as much people as possible. And let's see who is gonna be… I just have a hope that there will be somebody to take over when some of these bands retire; I hope that there's some new bands taking over. If we are one of them, I'll be happy. And I'll do what we can to make sure that we are. But we will see. It's also up to the audience to decide that."

SABATON has just kicked off "The Tour To End All Tours - North America 2022", a 25-date U.S. trek that will include a special headline show at Montreal's Place Bell, the band's first-ever arena headline concert in Canada. The tour, produced by FPC Live, launched on Thursday, September 15 at the Paramount Theatre in Seattle, Washington, and will wrap up at New York City's Hammerstein Ballroom on October 23. Supporting SABATON on all dates is special guest EPICA, the renowned Dutch symphonic metal band.

SABATON is considered to be one the most important bands to emerge from the Swedish modern metal scene, having been honored with five Metal Hammer Golden Gods Awards (including "Best Live Band" three different years) and nominated several times for the Swedish equivalent of the Grammy Awards, the Grammis. In 2016, SABATON's "The Last Stand" album debuted at No. 1 in three different European countries and cracked the Top 3 in four others. Sundström, Joakim Brodén (vocals),Chris Rörland (guitar),Hannes Van Dahl (drums) and Tommy Johansson (guitar) curate a festival of their own, Sabaton Open Air, that started back in 2008, as well as their own forward-thinking Sabaton Cruise which has been held since 2009.

SABATON's latest album, "The War To End All Wars", was released in March via Nuclear Blast. The follow-up to 2019's "The Great War" features 11 brand-new tracks talking about the tragedies and miracles that happened during World War I.