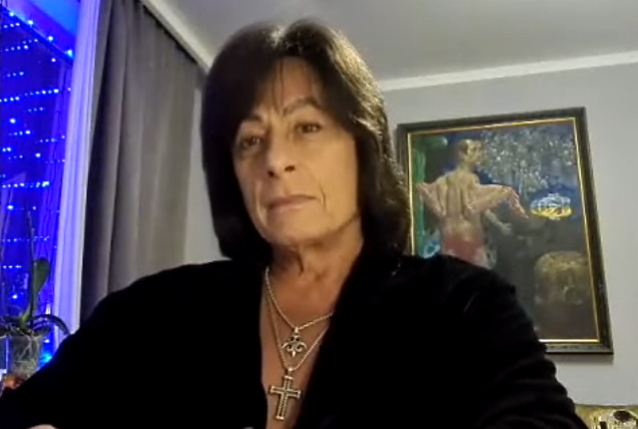 Legendary hard rock vocalist Joe Lynn Turner spoke to Metal From The Inside about his collaboration with Swedish producer and multi-instrumentalist Peter Tägtgren on a new album, tentatively due before the end of the year.

"I don't wanna talk too much about it, because it is a project we're trying to keep under wraps until we release it and keep some mystery about it — only because nowadays most mystery is gone," Joe said (see video below).

"What happened was I played a gig for Tommy, [Peter's] brother — he's a big fan of mine — in Sweden. And we got to be friends, Peter and I. And driving back to the train to go back down to Stockholm, he gave me a cassette with a track on it that he wasn't using, and he said, 'Why don't you write something to this?' I said, 'Okay.' So, about a month later, I sent something back, and he just went, 'Woah! Really?' And I went, 'Yeah. I think this is good stuff.' And it's gonna be the lead-off track — it's incredible. So anyway, we said, 'Let's do something.'

"Meanwhile, he's touring like crazy with two bands, I'm touring. We were writing a track here and so on and so forth," he continued. "I finally got up to Borlänge [in Sweden] again, and we got in the studio and the chemistry was unbelievable. We just wrote two or three tracks in two days — I mean, soup to nuts; just as you're gonna hear them on the record is the way we did them. So we knew we had something."

Regarding the musical direction of his project with Tägtgren, Joe said: "I think it's exciting. It's different. It doesn't sound like anyone else. I really mean that. Just because of the input where Peter comes as a writer, artist and producer. And, of course, it's still melodic, because I make sure that I've got those melodies and choruses. When I say 'heavier' or 'darker,' [it's] mostly because of the times we live in, [so there were] all these subjects [to write about]. So it is a real piece of art, in a sense of the word, because art should always be a reflection of its time; this is exactly what all great art has been through the ages.

"All I can say is that we're very excited about it," he added. "We think people are gonna absolutely love it, because it has all of the building blocks. It's got a bit of industrial metal, it's got a bit of classic rock vocals, it's got subject matter. It's darker, it's deeper, it's broader. So, we think it's gonna raise some eyebrows."

As for a possible release date for the album, Joe said: "What we probably will do is… Say we release a single in April or May — when I say a single, [I mean] a track. Let's release it then. Because we don't know what this year's gonna be like for touring, for anything. We really don't know if concerts are coming back. And we talked the other day about it and said, 'Look, we're not gonna miss out on the touring schedule with a great album like this,' that I really believe is perfect for festivals and what people are gonna wanna see and hear. So, let's release something, say, May, let's release something in June — let's do it piece by piece till finally we say, 'Okay, here's the album. We got promoters interested. We got fans interested. Let's go out there and actually play it in front of them live.' So we're just trying to be smart about it. We're not trying to be smug about it or anything. It's just smart. Because who knows when we're gonna get back on stage? And, really, an artist's calling card is the record; that's your calling card. Here's our sound. Come and see it, come and hear it for yourself."

Turner's career spans more than 40 years and includes collaborations with the likes of RAINBOW, DEEP PURPLE and Yngwie Malmsteen.

Tägtgren is the founder and co-founder of PAIN, HYPOCRISY and LINDEMANN, as well as the owner of a successful recording studio in Sweden. Most of his time is devoted to The Abyss studio, where has worked on many classic albums, including those by DIMMU BORGIR, IMMORTAL, ENSLAVED, DARK FUNERAL and CHILDREN OF BODOM.